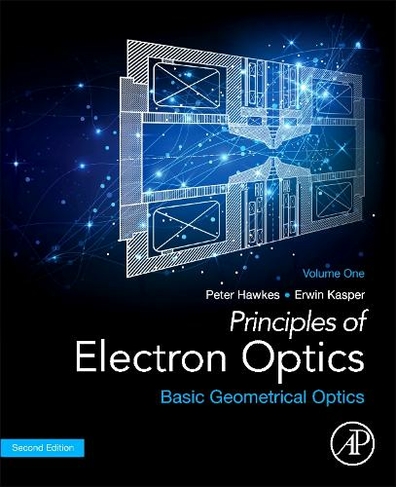 Also available on eBook for £188.75. Click here to purchase from Rakuten Kobo

Volume one of Principles of Electron Optics: Basic Geometrical Optics, Second Edition, explores the geometrical optics needed to analyze an extremely wide range of instruments: cathode-ray tubes; the family of electron microscopes, including the fixed-beam and scanning transmission instruments, the scanning electron microscope and the emission microscope; electron spectrometers and mass spectrograph; image converters; electron interferometers and diffraction devices; electron welding machines; and electron-beam lithography devices. The book provides a self-contained, detailed, modern account of electron optics for anyone involved with particle beams of modest current density in the energy range up to a few mega-electronvolts. You will find all the basic equations with their derivations, recent ideas concerning aberration studies, extensive discussion of the numerical methods needed to calculate the properties of specific systems and guidance to the literature of all the topics covered. A continuation of these topics can be found in volume two, Principles of Electron Optics: Applied Geometrical Optics. The book is intended for postgraduate students and teachers in physics and electron optics, as well as researchers and scientists in academia and industry working in the field of electron optics, electron and ion microscopy and nanolithography.

Peter Hawkes graduated from the University of Cambridge and subsequently obtained his PhD in the Electron Microscopy Section of the Cavendish Laboratory. He remained there for several years, working on electron optics and digital image processing before taking up a research position in the CNRS Laboratory of Electron Optics (now CEMES-CNRS) in Toulouse, of which he was Director in 1987. During the Cambridge years, he was a Research Fellow of Peterhouse and a Senior Research fellow of Churchill College. He has published extensively, both books and scientific journal articles, and is a member of the editorial boards of Ultramicroscopy and the Journal of Microscopy. He was the founder-president of the European Microscopy Society, CNRS Silver Medallist in 1983 and is a Fellow of the Optical Society of America and of the Microscopy Society of America (Distinguished Scientist, Physics, 2015), Fellow of the Royal Microscopical Society and Honorary Member of the French Microscopy Society. In 1982, he was awarded the ScD degree by the University of Cambridge. In 1982, he took over editorship of the Advances in Electronics & Electron Physics (now Advances in Imaging & Electron Physics) from Claire Marton (widow of the first editor, Bill Marton) and followed Marton's example in maintaining a wide range of subject matter. He added mathematical morphology to the topics regularly covered; Jean Serra and Gerhard Ritter are among those who have contributed. In 1980, he joined Professor Wollnik (Giessen University) and Karl Brown (SLAC) in organising the first international conference on charged-particle optics, designed to bring together opticians from the worlds of electron optics, accelerator optics and spectrometer optics. This was so successful that similar meetings have been held at four-year intervals from 1986 to the present day. Peter Hawkes organised the 1990 meeting in Toulouse and has been a member of the organising committee of all the meetings. He has also participated in the organization of other microscopy-related congresses, notably EMAG in the UK and some of the International and European Congresses on electron microscopy as well as three Pfefferkorn conferences. He is very interested in the history of optics and microscopy, and recently wrote long historical articles on the correction of electron lens aberrations, the first based on a lecture delivered at a meeting of the Royal Society. He likewise sponsored biographical articles for the Advances on such major figures as Ernst Ruska (Nobel Prize 1986), Helmut Ruska, Bodo von Borries, Jan Le Poole and Dennis Gabor (Nobel Prize, 1971). Two substantial volumes of the series were devoted to 'The Beginnings of Electron Microscopy' and 'The Growth of Electron Microscopy'. and others have covered 'Cold Field Emission Scanning Transmission Electron Microscopy' and 'Aberration-corrected Electron Microscopy', with contributions by all the main personalities of the subject. Erwin Kasper studied physics at the Universities of Munster and Tubingen (Germany), where he obtained his PhD in 1965 and the habilitation to teach physics in 1969. After scientific spells in the University of Tucson, Arizona (1966) and in Munich (1970), he resumed his research and teaching in the Institute of Applied Physics, University of Tubingen, where he was later appointed professor. He lectured on general physics and especially on electron optics. The subject of his research was theoretical electron optics and related numerical methods on which he published numerous papers. After his retirement in 1997, he published a book on numerical field calculation (2001).