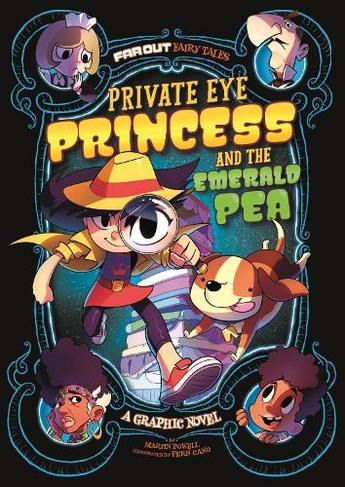 Detective Princess King is taking on her toughest case yet: to find the "pea", a priceless emerald that's disappeared from Mrs Snell's jewellery collection. But as Princess searches for clues, she discovers that Snell Manor holds many mysteries from secret passageways to a towering bed of stacked mattresses. Can Princess use her sleuthing skills to solve the crime and prove she's the best private investigator in town? Experience the classic "Princess and the Pea" fairy tale like never before in this graphic novel retelling. With information on the original tale, a guide to the story's twists and visual discussion questions, this book will engage and excite readers in equal measure.

Since 1986, Martin Powell has been a freelance writer. He has written hundreds of stories, many of which have been published by Disney, Marvel, Tekno comix, Moonstone Books, and others. In 1989, Powell received an Eisner Award nomination for his graphic novel Scarlet in Gaslight. This award is one of the highest comic book honors. Fernando Cano is an emerging illustrator born in Mexico City, Mexico. He currently resides in Monterrey, Mexico, where he works as a full-time illustrator and colorist at Graphikslava studio. He has done illustration work for Marvel, DC Comics, and role-playing games like Pathfinder from Paizo Publishing. In his spare time, he enjoys hanging out with friends, singing, rowing, and drawing.