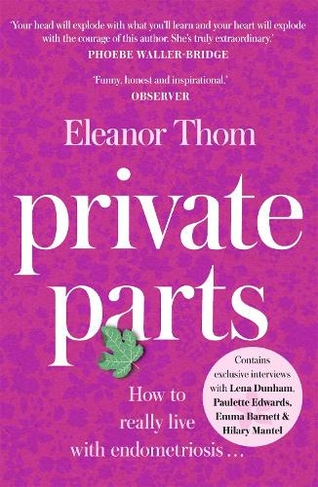 Private Parts: How To Really Live With Endometriosis

By Eleanor Thom (Author)
Paperback
https://www.whsmith.co.uk/products/private-parts-how-to-really-live-with-endometriosis/eleanor-thom/paperback/9781473687585-12-000.html £9.01 rrp £10.99 Save £1.98 (18%)
GBP
Availability
In Stock
Free Delivery Available When You Spend £25 Or More
Details
Spend £25 on eligible products to receive free standard delivery to home or free next working day click and collect to store
Share

Eleanor writes as fearlessly as she has fought this disease; with heart, honesty and a humour that is rarely afforded to subjects as serious as this. Your head will explode with what you'll learn and your heart will explode with the courage of this author. She's truly extraordinary - Phoebe Waller-Bridge Private Parts is just like its author: funny, brave, charming, honest, reassuring and ultimately brilliant - Joe Lycett Like 1 in 10 women in the UK, Eleanor Thom has endometriosis and she thinks that it's time to talk a bit more about our private parts. Part memoir, part guide book and part survival guide, Private Parts retraces Eleanor's own journey with endometriosis, offering readers practical, down-to-earth and friendly advice covering everything from what actually happens in an internal exam, to finding the right specialist for you, the perfect post-op wardrobe and to why you should look to Frida Kahlo for inspiration in your darkest moments. Written for those looking to live well with their endometriosis and for those looking for help to understand the disease, this is a call to action for people to speak up about an illness which is still so misunderstood. Features exclusive interviews with Hilary Mantel, Paulette Edwards, Lena Dunham and Emma Barnett as well as insights from experts in the field.

Eleanor Thom was born in Sheffield, England. She graduated from Manchester University with a BA in Film and Theatre. On graduation she created the award winning, all female sketch group Lady Garden who toured the UK circuit extensively, appearing on TV and Radio and were Edinburgh Fringe Festival favourites. In 2013 she wrote and performed the critically acclaimed character stand-up show I am Bev. As an actor she has she has appeared in Absolutely Fabulous (BBC), Live At The Electric (BBC) and Drifters (Channel 4). Eleanor has written for Standard Issue Magazine and for other comedians' on their live and TV work. This is her first book. She lives in London.