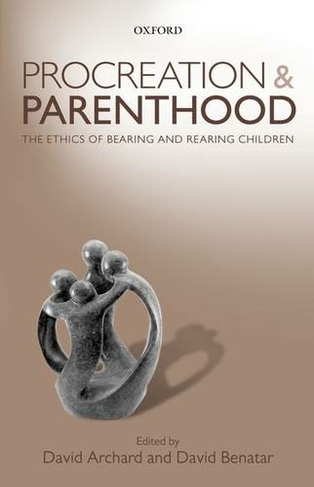 Procreation and Parenthood: The Ethics of Bearing and Rearing Children

Producing and rearing children are immensely important human activities. Procreation and Parenthood offers new and original essays by leading philosophers on some of the main ethical issues raised by these activities. An Introduction supplies an accessible overview of the current debates. Individual chapters then take up particular problems such as: the morality of bringing people into existence; what limits there might be on a person's freedom to reproduce; whether human beings need to ensure that they only create the best possible children; whether there is a conflict between justice and parents' devotion of time and money to their own children; and, whether parents acquire their role because of their intention to do so or because they are responsible for bringing children into being.

David Archard has been Professor of Philosophy and Public Policy at Lancaster University since 2003. Before that he taught at the Universities of Ulster and St Andrews. He has published widely in applied moral, political and legal philosophy, especially on the topics of children, family and state; and sexual morality and the law. He is Honorary Chair of the Society for Applied Philosophy. David Benatar is Professor and Head of Philosophy at the University of Cape Town. He is the author of Better Never to Have Been: The Harm of Coming into Existence (Oxford, 2006).