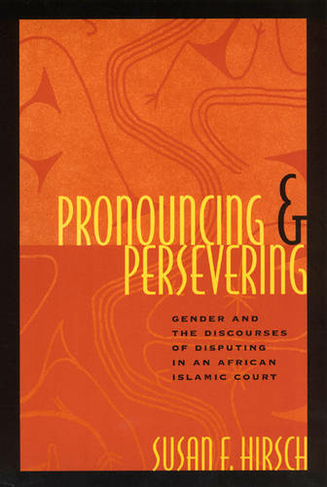 Pronouncing and Persevering: Gender and the Discourses of Disputing in an African Islamic Court (Language & Legal Discourse S.)

The title of this study reflects the image of gender relations most commonly associated with Islamic law - this being a study of disputes involving Swahili Muslims in coastal Kenya. Men need only "pronounce" divorce to resolve marital conflicts, while embattled wives must persevere by enduring marital hardships. Susan Hirsch's observations of Islamic courts uncover how Muslim women actively use legal processes to transform their domestic lives, achieving victories on some fronts, but reinforcing their image as subordinate to men through the speech they produce in court. The focus of this text is the language used in disputes, particularly how men and women narrate their claims, and how their speech shapes and is shaped by gender hierarchy in postcolonial Swahili society. Based on field research and court testimony, Hirsch's book opposes the conventional view that women are powerless under Islamic law. 3 tables