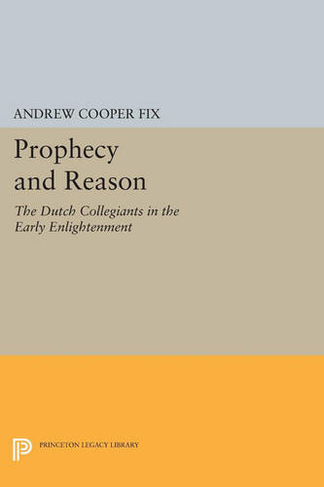 Prophecy and Reason: The Dutch Collegiants in the Early Enlightenment (Princeton Legacy Library)

During the second half of the seventeenth century the entire intellectual framework of educated Europe underwent a radical transformation. A secularized view of humanity and nature was replacing faith in the direct operation of God's will in the temporal world, while a growing confidence in human reason and the Scientific Revolution turned back the epistemological skepticism spawned by the Reformation. By focusing on the Dutch Collegiants, a radical Protestant group that flourished in Holland from 1620 to 1690, Andrew Fix explicates the mechanisms at work in this crucial intellectual transition from traditional to modern European worldview. Starting from Rijnsburg, near Leiden, the Collegiants spread over the course of the century to every major Dutch city. At the same time, their thinking evolved from a millenarian spiritualism influenced heavily by the sixteenth-century Radical Reformation to a philosophical rationalism similar to the ideas of Spinoza. Fix has taken on an important topic in the history of ideas: the circumstances under which natural reason came to be accepted as an autonomous source of truth for the individual conscience. He also has fresh and concrete things to say about the relationship between religion and science in early modern European history. Originally published in 1990. The Princeton Legacy Library uses the latest print-on-demand technology to again make available previously out-of-print books from the distinguished backlist of Princeton University Press. These editions preserve the original texts of these important books while presenting them in durable paperback and hardcover editions. The goal of the Princeton Legacy Library is to vastly increase access to the rich scholarly heritage found in the thousands of books published by Princeton University Press since its founding in 1905.