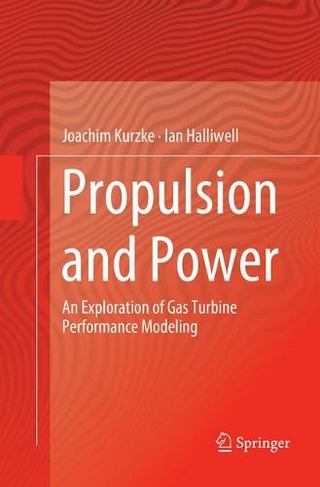 The book is written for engineers and students who wish to address the preliminary design of gas turbine engines, as well as the associated performance calculations, in a practical manner. A basic knowledge of thermodynamics and turbomachinery is a prerequisite for understanding the concepts and ideas described. The book is also intended for teachers as a source of information for lecture materials and exercises for their students. It is extensively illustrated with examples and data from real engine cycles, all of which can be reproduced with GasTurb (TM). It discusses the practical application of thermodynamic, aerodynamic and mechanical principles. The authors describe the theoretical background of the simulation elements and the relevant correlations through which they are applied, however they refrain from detailed scientific derivations. 557 Illustrations, black and white; XXIV, 755 p. 557 illus.

Joachim Kurzke spent his engineering life dealing with gas turbine performance, first at the Technical University of Munich, Institute for Flight Propulsion. 1976 Kurzke joined the performance department of the company which is now MTU Aero Engines and stayed there for 28 years. He worked on a multitude of different engine projects, designed the engine performance program MOPS for MTU, and applied it to the everyday problems in the performance department.MOPS is due to the modular design very flexible and can be adapted easily to new requirements, however, it's use requires significant training in gas turbine performance. This observation resulted in the development of the performance program GasTurb (TM). This software concentrates on the user interface, without neglecting any detail which is required for professional gas turbine performance work. After more than 20 years in the public domain, GasTurb (TM) is well known and acknowledged all over the world. Kurzke has published numerous papers dealing with gas turbine performance, and was a member of several RTO (former AGARD) working groups, as well as the SAE E33 committee "Thrust in Flight". He is still a member of the ASME/IGTI Aircraft Engine and Education Committees. Ian Halliwell obtained his B.Sc. in Aeronautical Engineering and M.Sc. in Aerodynamics from Imperial College, London, followed by a Ph.D. in Experimental Gas Dynamics from the University of Southampton. His professional career began in 1975 at Rolls-Royce, Derby in Turbine Aerodynamics Research. He then crossed the Atlantic to work for Pratt and Whitney Canada in Mississauga and subsequently GE in Cincinnati, where he moved into the preliminary design of complete engine systems and spent a few years on the High Speed Civil Transport program. During that period, he also began teaching in GE after-hours education. While continuing to model complete engine systems, his teaching activities continued after moving to the small business world, as a contractor at the NASA Glenn Research Center and expanded through involvement with AIAA and ASME/IGTI. He chaired the AIAA Air Breathing Propulsion and Gas Turbine Engine Technical Committees and is still an active member of AIAA. He is also a member of the ASME/IGTI Aircraft Engine and Education Committees. His connection to students and university faculty was enhanced during the 14 years he organized the AIAA International Engine Design Competition for undergraduate teams. He met Joachim Kurzke while presenting a tutorial on Preliminary Engine Design at ASME TurboExpo in 2001 and the seeds were sown for this book a few years later. His current special interests are in new engine architectures, involving vaneless counter-rotation and exoskeletal architectures for compressors and turbines - both axial and radial. The past 10 years or so, back in aerodynamics, involved the development and application of new design tools.