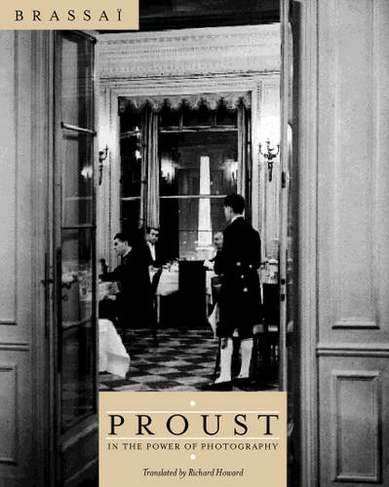 Proust in the Power of Photography 2nd ed.

One of the most original and memorable photographers of the 20th century, Brassai was also a journalist, sculptor and writer. He took great pride in his writing, and he loved literature and language - French most of all. When he arrived in Paris in 1924, Brassai began teaching himself French by reading Proust. Captured by the sensuality and visual strategies of Proust's writing, Brassai soon became convinced that he had discovered a kindred spirit. Brassai wrote: "In his battle against Time, that enemy of our precarious existence, ever on the offensive though never openly so, it was in photography, also born out of an age-old longing to halt the moment, to wrest it from the flux of duration in order to "fix" it forever in a semblance of eternity, that Proust found his best ally". He quoted Proust in his own writing, and from the annotated books in his library, we know that he spent a lifetime studying and dissecting Proust's prose, often line by line. Drawing on his own experience as a photographer and author, Brassai discovers a neglected aspect of Proust's interests, offering us a fascinating study of the role of photography both in Proust's oeuvre and in early 20th-century culture. Brassai show us how Proust was excessively interested in possessing portraits of his acquaintances and how the process by which he remembered and wrote was quite similar to the ways on which photographs register and reveal life's images. This book - translated by Richard Howard - features previously obscure photographs from Brassai's High Society series and offers a rare glimpse into two of France's most fascinating artistic minds. 16 duotones

Brassa (born Gyula Hal sz, 1899-1984) was a photographer, journalist, and author of photographic monographs and literary works, including Letters to My Parents and Conversations with Picasso, both published by the University of Chicago Press. Richard Howard, a professor at the School of the Arts at Columbia University, is an award-winning poet and translator. His translations include books by Gide, Cocteau, Giraudoux, De Beauvoir, Barthes, Cioran, and Proust, and Baudelaire's Fleurs du Mal, for which he received the American Book Award.