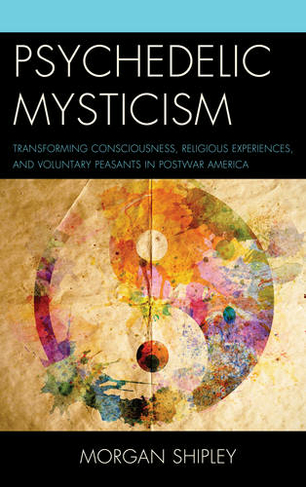 By Morgan Shipley (Author)
Hardback
https://www.whsmith.co.uk/products/psychedelic-mysticism-transforming-consciousness-religious-experiences-and-voluntary-peasants-in-pos/morgan-shipley/hardback/9781498509091-12-000.html £63.00 rrp £70.00 Save £7.00 (10%)
GBP
Availability
In Stock
With Free Standard Delivery To Your Home Or Store
Details
Spend £25 on eligible products to receive free standard delivery to home or free next working day click and collect to store
Share

Concerned with scholarly, popular, and religious backdrops that understand the connection between psychedelics and mystical experiences to be devoid of moral concerns and ethical dimensions-a position supported empirically by the rise of acid fascism and psychedelic cults by the late 1960s-Psychedelic Mysticism: Transforming Consciousness, Religious Experiences, and Voluntary Peasants in Postwar America traces the development of sixties psychedelic mysticism from the deconditioned mind and perennial philosophy of Aldous Huxley, to the sacramental ethics of Timothy Leary, Richard Alpert, and Ralph Metzner, to the altruistic religiosity practiced by Stephen Gaskin and The Farm. Building directly off the pioneering psychedelic writing of Huxley, these psychedelic mystics understood the height of psychedelic consciousness as an existential awareness of unitive oneness, a position that offered worldly alternatives to the maladies associated with the postwar moment (e.g., vapid consumerism and materialism, lifeless conformity, unremitting racism, heightened militarism). In opening a doorway to a common world, Morgan Shipley locates how psychedelics challenged the coherency of Western modernity by fundamentally reorienting postwar society away from neoliberal ideologies and toward a sacred understanding of reality defined by mutual coexistence and responsible interdependence. In 1960s America, psychedelics catalyzed a religious awakening defined by compassion, expressed through altruism, and actualized in projects that sought to ameliorate the conditions of the least advantaged among us. In the exact moments that historians and cultural critics often locate as signaling the death knell of the counterculture, Gaskin and The Farm emerged, not as a response to the perceived failures of the hippies, nor as an alternative to sixties politicos, but in an effort to fulfill the religious obligation to help teach the world how to live more harmoniously. Today, as we continue to confront issues of socioeconomic inequality, entrenched differences, widespread violence, and the limits of religious pluralism, Psychedelic Mysticism serves as a timely reminder of how religion in America can operate as a tool for destabilization and as a means to actively reimagine the very basis of how people relate-such a legacy can aid in our own efforts to build a more peaceful, sustainable, and compassionate world.