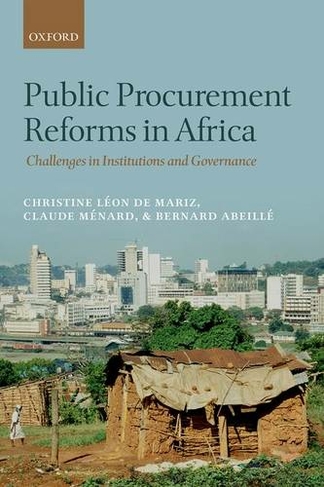 Public Procurement Reforms in Africa Challenges in Institutions and Governance

Institutional reforms and their contribution to development and growth have been a source of renewed interest as well as of many challenges over the last two decades. Identifying the forces that push towards reform and the conditions that determine the success or failure of reforms, building organizational arrangements needed to make modifications to the rules of the game sustainable, and understanding the limits to the transfer of reforms and to the help that international organizations and foreign institutions can provide to support change, raise intellectually difficult and politically highly sensitive issues. This book attempts to address these issues from an economic perspective. Combining knowledge and field experience, it develops an analysis of institutional changes and organizational transformations based on the experience of the public procurement reforms carried out in sub-Saharan Africa. This highlights the economic significance of procurement and the formidable obstacles that institutional changes face. Using an original dataset, it explores the gap between the expectations and what has been achieved. It develops a framework that intends to capture the complex interaction between the different components of reform and aims to provide useful insights for researchers and policy makers. 21 Figures, 16 Tables, 8 Boxes

Christine Leon de Mariz was a Senior Economist at the World Bank and has more than a decade of experience in international development. She managed projects focusing on institution, governance, and public finance in Africa, the Middle East, and Latin America. Christine is a graduate of Sciences-Po Paris, holds a PhD in Economics from the University of Paris (Pantheon-Sorbonne), and was a fellow at Harvard University.Claude Menard is Professor of Economics at the University of Paris (Pantheon-Sorbonne) and affiliated to the Centre d'Economie de la Sorbonne. He graduated from the University of Montreal in Canada and completed his PhD at the Sorbonne. He has been visiting professor in numerous universities worldwide, has published extensively in international journals, and has worked as consultant for several international organizations and governments, mainly on issues of reform in networkinfrastructures and institutional changes. He has been co-editor of the Journal of Economic Behavior and Organization for over ten years, and is a co-founder with Ronald Coase, Douglas North, Oliver Williamson and others of the International Society for New Institutional Economics. He is also co-founder and member ofthe board of the Ronald Coase Institute.Bernard Abeille is a Public Procurement Specialist who initially worked in the private sector in major infrastructure and city planning programs, 10 years in French Aid abroad, and more than 30 years at the World Bank. He has been head of the procurement family for the Africa region and has assumed important responsibility in the World Bank Procurement Board. He initiated major procurement reforms and played a major role in the working group that issued the OECD Procurement Base-LineIndicators which are now applied worldwide to evaluate national procurement systems. Since he retired, he has been a consultant for the World Bank, African Development Bank, Millennium Challenge Corporation, Agence Francaise de Developpement, and Inter-American Development Bank, and has been involved innumerous training programs to develop capacity in developing countries. His academic background is in architecture, city planning, legal aspects of construction and regional development.