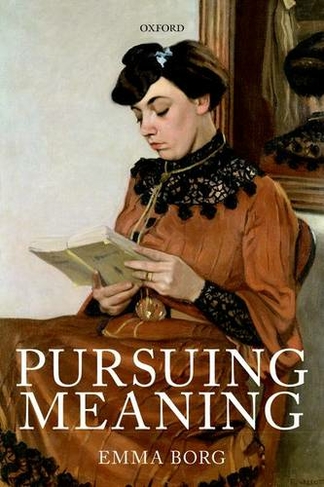 Emma Borg examines the relation between semantics (roughly, features of the literal meaning of linguistic items) and pragmatics (features emerging from the context within which such items are being used), and assesses recent answers to the fundamental questions of how and where to draw the divide between the two. In particular, she offers a defence of what is commonly known as 'minimal semantics'. Minimal semantics, as the name suggests, wants to offer a minimal account of the interrelation between semantics and pragmatics. Specifically, it holds that while context can affect literal semantic content in the case of genuine (i.e. lexically or syntactically marked) context-sensitive expressions, this is the limit of pragmatic input to semantic content. On all other occasions where context of utterance appears to affect content, the minimalist claims that what it affects is not literal, semantic content but what the speaker conveys by the use of this literal content-it affects what a speaker says but not what a sentence means. As Borg makes clear, the minimalist must allow some contextual influence on semantic content, but her claim is that this influence can be limited to 'tame' pragmatics-the kind of rule-governed appeals to context which won't scare formally minded horses. Pursuing Meaning aims to make good on this claim. The book also contains an overview of all the main positions in the area, clarification of its often complex terminology, and an exploration of key themes such as word meaning, mindreading, and the relationship between semantics and psychology.

Emma Borg joined the Philosophy Department at the University of Reading in 1998, shortly before she completed her PhD at University College London. She has been with the Department ever since and is currently Head of Department. She has held visiting positions at Rutgers University and the University of Chicago, and was a recipient of a Philip Leverhulme Prize (for 'outstanding young researchers'). She is on the editorial boards for the journals Ratio,Theoria, and the International Review of Pragmatics, and has published widely on issues within the philosophy of language, including the monograph Minimal Semantics (OUP, 2004).