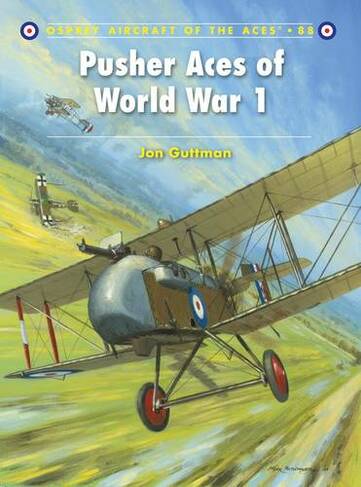 Pusher fighters, designed with the engine at the rear and the machine gun at the front, may have looked ungainly, yet they were able to hold their own remarkably well against their German counterparts. This is the story of the unusual pusher and its many aces, including Lanoe Hawker VC, who formed and led Britain's first fighter squadron before dying in a ten-minute duel with Manfred von Richtofen, American 'cowboy' ace Frederick Libby, third-ranking French ace Charles Nungesser and the aggressive Belgian ace Fernand Jacquet. Packed with colourful artwork of a variety of pusher designs, paint schemes, and camouflage from many different nationalities, this book guides you through the twists and turns of this bizarre yet surprisingly successful fighter during World War 1. Illustrations (some col.)

A resident of Leesburg, Virginia, Jon Guttman is senior editor, research director and contributing writer for Primedia Enthusiast Publications. Jon is a specialist in World War I aviation. The author lives in Virginia, USA.