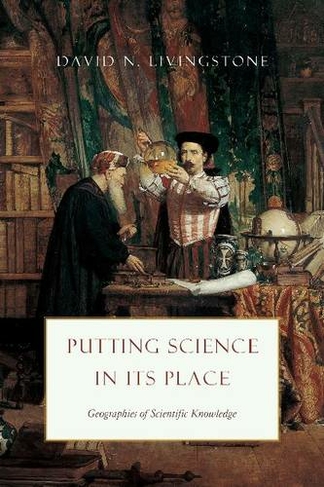 Putting Science in Its Place: Geographies of Scientific Knowledge (science.culture)

We are accustomed to thinking of science and its findings as universal. After all, one atom of carbon plus two of oxygen yields carbon dioxide in Amazonia as well as in Alaska; a scientist in Bombay can use the same materials and techniques to challenge the work of a scientist in New York; and of course the laws of gravity apply worldwide. Why, then, should the locations where science is done matter at all? David N. Livingstone here puts that question to the test with his fascinating study of how science bears the marks of its place of production. Putting Science in Its Place establishes the fundamental importance of geography in both the generation and the consumption of scientific knowledge, using historical examples of the many places where science has been practiced. Livingstone first turns his attention to some of the specific sites where science has been made - the laboratory, museum, and botanical garden, to name some of the more conventional locales, but also places like the coffeehouse and cathedral, ship's deck and asylum, even the human body itself. In each case, he reveals just how the space of inquiry has conditioned the investigations carried out there. Putting Science in Its Place powerfully concludes by examining the remarkable mobility of science and the seemingly effortless way it moves around the globe. 31 halftones, 5 maps

David N. Livingstone is professor of geography and intellectual history at Queen's University Belfast. A Fellow of the British Academy and a member of both the Academia Europaea and the Royal Irish Academy, he is the author of numerous books, including The Geographical Tradition: Episodes in the History of a Contested Enterprise and Adam's Ancestors: Race, Religion and the Politics of Human Origins.