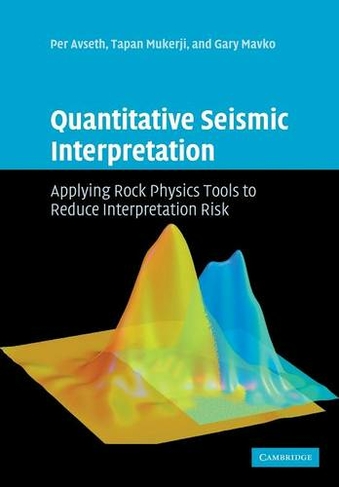 Quantitative Seismic Interpretation demonstrates how rock physics can be applied to predict reservoir parameters, such as lithologies and pore fluids, from seismically derived attributes. The authors provide an integrated methodology and practical tools for quantitative interpretation, uncertainty assessment, and characterization of subsurface reservoirs using well-log and seismic data. They illustrate the advantages of these new methodologies, while providing advice about limitations of the methods and traditional pitfalls. This book is aimed at graduate students, academics and industry professionals working in the areas of petroleum geoscience and exploration seismology. It will also interest environmental geophysicists seeking a quantitative subsurface characterization from shallow seismic data. The book includes problem sets and a case-study, for which seismic and well-log data, and MATLAB (R) codes are provided on a website (http://www.cambridge.org/9780521151351). These resources will allow readers to gain a hands-on understanding of the methodologies. 55 Plates, color; 55 Halftones, color; 171 Line drawings, black and white

Per Avseth is a geophysical consultant at Odin Petroleum in Bergen, Norway, and Adjunct Professor in Reservoir Geophysics at the Norwegian University of Science and Technology (NTNU) in Trondheim, Norway. Per received his M.Sc. in Applied Petroleum Geosciences from NTNU, and his Ph.D. in Geophysics from Stanford University, California. Per worked at Norsk Hydro Research Center in Bergen from 2001-6, and at Rock Physics Technology from 2006-7. Per's research interests include applied rock physics, and AVO analysis, for quantitative seismic exploration and reservoir characterization. Per has taught applied rock physics courses for several oil companies and has served as course instructor at EAGE Educational Days in London and Moscow. Per was the SEG Honorary Lecturer in Europe in 2009. Tapan Mukerji received his Ph.D. in Geophysics from Stanford University in 1995 and is now an Associate Professor (Research) in Energy Resources Engineering and a member of the Stanford Rock Physics Project at Stanford University. Professor Mukerji co-directs the Stanford Center for Reservoir Forecasting (SCRF) focussing on problems related to uncertainty and data integration for reservoir modeling. His research interests include wave propagation and statistical rock physics, and he specializes in applied rock physics and geostatistical methods for seismic reservoir characterization, fracture detection, 4-D monitoring, and shallow subsurface environmental applications. Professor Mukerji is also a co-author of The Rock Physics Handbook (Cambridge University Press, second edition 2009), and has taught numerous industry courses. He received the Karcher award from the Society of Exploration Geophysicists in 2000. Gary Mavko received his Ph.D. in Geophysics from Stanford University in 1977 where he is now Professor (Research) of Geophysics. Professor Mavko co-directs the Stanford Rock Physics and Borehole Geophysics Project (SRB), a group of approximately 25 researchers working on problems related to wave propagation in earth materials. Professor Mavko is also a co-author of The Rock Physics Handbook, and has been an invited instructor for numerous industry courses on rock physics for seismic reservoir characterization. He received the Honorary Membership award from the Society of Exploration Geophysicists in 2001, and was the SEG Distinguished Lecturer in 2006.