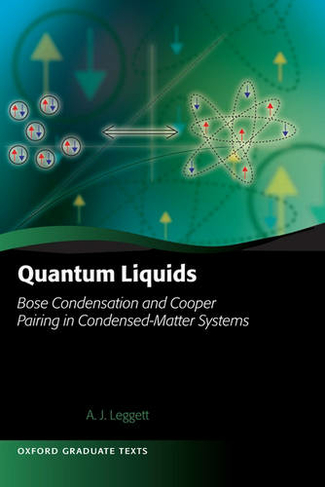 Also available on eBook for £54.47. Click here to purchase from Rakuten Kobo

Starting from first principles, this book introduces the closely related phenomena of Bose condensation and Cooper pairing, in which a very large number of single particles or pairs of particles are forced to behave in exactly the same way, and explores their consequences in condensed matter systems. Eschewing advanced formal methods, the author uses simple concepts and arguments to account for the various qualitatively new phenomena which occur in Bose-condensed and Cooper-paired systems, including but not limited to the spectacular macroscopic phenomena of superconductivity and superfluidity. The physical systems discussed include liquid 4-He, the BEC alkali gases, "classical" superconductors, superfluid 3-He, "exotic" superconductors and the recently stabilized Fermi alkali gases. The book should be accessible to beginning graduate students in physics or advanced undergraduates. 46 line drawings

Professor A.J.LeggettMacarthur Professor and Professor of PhysicsUniversity of Illinois at Urbana-ChampaignAnthony J.Leggett was born in London, England in March 1938. He attended Balliol College, Oxford where he majored in Literae Humaniores (classical languages and literature, philosophy and Greco-Roman history), and thereafter Merton College, Oxford where he took a second undergraduate degree in Physics. He completed aD.Phil.(Ph.D.) degree in theoretical physics under the supervision of D.ter Haar. After postdoctoral research in Urbana, Kyoto and elsewhere he joined the faculty of the University of Sussex (UK) in 1967, being promoted to Reader in 1971 and to Professor in 1978. In 1983 he became John D. and Catherine T. Macarthur Professor at the University of Illinois at Urbana-Champaign, a position he currently holds. His principal research interests lie in the areas of condensed matter physics,particularly high-temperature superconductivity, and the foundations of quantum mechanics.