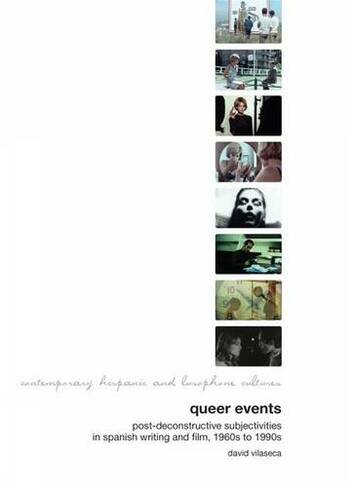 By David Vilaseca (Author)
Hardback
https://www.whsmith.co.uk/products/queer-events-postdeconstructive-subjectivities-in-spanish-writing-and-film-1960s1990s-contemporary-h/david-vilaseca/hardback/9781846314674-01-000.html £85.00
GBP
Availability
Currently unavailable. We don't know when or if this item will be back in stock
With Free Saver Delivery
Details
FREE SHIPPING over £20 for Saver Delivery
Share

Queer Events studies the representations of queer subjectivities during the Spanish Transition era (1960s to 1990s), drawing on some of the most influential critical theorists and philosophers of our times (Gilles Deleuze, Giorgio Agamben, Alain Badiou). The book focuses on well-known Spanish authors and film-makers (Terenci Moix, Vicente Aranda) as well as on others who have merited far less critical attention so far (including Antonio Roig, Alberto Cardin, and the directors of the short-lived avant-garde film movement known as 'Escuela de Barcelona').

David Vilaseca was Professor of Hispanic Studies and Critical Theory at Royal Holloway, University of London, and author of Hindsight and the Real: Subjectivity in Gay Hispanic Autobiography (Peter Lang, 2003) and L'aprenentatge de la soledat (Edicions 3i4, 2008; winner of the 2007 Octubre Prize for Catalan fiction). He was killed in a traffic accident in London on 9 February 2010.