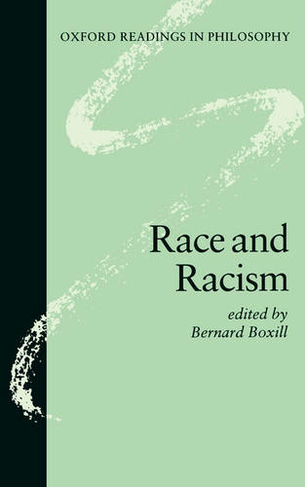 The eighteen essays in this new book deal with the meaning of two highly contested ideas: race and racism. Race is variously declared to be a self-evident fact of nature, a natural kind, a biological category, a political category, a social construction, an invention, and a fiction. Similarly, although racism is commonly defined as colour prejudice, some maintain that it is ill-will towards certain races; others that it is a belief, or sometimes an ideology or theory of racial superiority and inferiroity; and still others that it is the practice of unjust racial discrimination. In this volume, Bernard Boxill has collected a wide range of analytical writing that discusses the nature of these controversial ideas. With an introduction exploring the themes and conflicting ideas present in the book, and including a previously unpublished piece on the alleged racism of Immanuel Kant, this book will stimulate a critical understanding of the true meaning and far-reaching implications of an understanding of race and racism. As part of the successful Oxford Readings in Philosophy series, this book engages the reader with a range of ideas that will contribute to a greater understanding of race and racism.

Bernard Boxill has devoted his professional life to philosophical analysis of policies related to race and racism. He is currently Professor of Philosophy at the University of North Carolina, Chapel Hill, and has previously taught at the University of California Santa Barbara and the University of South Florida. Professor Boxill is also the author of Blacks and Social Justice (Rowman and Littlefield: 1984, 1992).