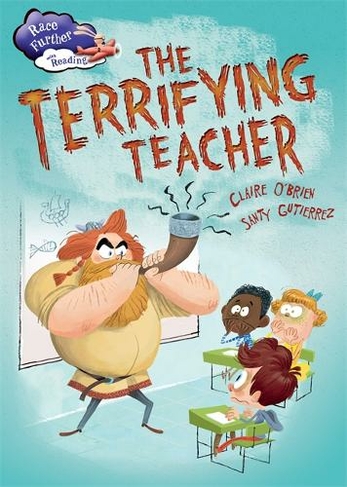 Horrible Histories meets Wimpy Kid in these funny stories mismatching characters with careers. The stories are colour chapter books perfect for the independent reader. Mr Bloodaxe is not like any other teacher at school, he is just a little bit scary, or possibly even terrifying! He has a striking resemblance to a famous Viking of the same name and his lessons are far from comfortable... Race Further with Reading is a series designed to build reading confidence with illustrated stories in manageable bite-size chapters, which encourage a sense of achivement at completing each one. They follow on a level from the Race Ahead with Reading series with stories of 2,000 words. The books are perfect for children aged 6-8 or who read book band 11.

Claire is the author of the Cordelia Codd stories. These follow Cordelia's comic and touching misadventures as she struggles to deal with the difficult issues faced by many pre-teen children. Claire is a former teacher who has worked in the UK, USA and Colombia. Her favourite books at the moment arePrivate Peaceful by Michael MorpurgoKrindlekrax by Philip RidleyCoram Boy by Jamila GavinArtichoke Hearts by Sita BrahmachariHer favourite films are currentlyPandora and the Flying Dutchman, 1951Billy Elliot, 2000The Belles of St.Trinian's, 1954The Artist, 2011Claire has been writing since Miss Fox, her year four teacher, sat her in a corner for talking too much and told her to get on with some handwriting. She realised that she was happiest sitting alone with a pencil and her thoughts, but her own stories came much later. Santy Gutierrez was born in Spain, grew up in Vigo, and now lives in Corunna (La Coruna), both seaside cities. He doesn't remember choosing to be a cartoonist - he just doesn't remember ever having been anything else! If he had lived in the Stone Age, he'd be painting mammoths on the cave instead of going out with the rest of the tribe to hunt them.Santy is intellectually curious and anything that tickles his neurons attracts him like a moth to the light. Everything that influences him comes out as drawings. He spends most of his time on his own planet like the Little Prince ... and in spite of that, he has been able to have a wonderful, loving family of which he is very proud, and which he considers an undeserved gift. His wife, son, and friends are his personal inspiration.He has a fresh, evocative cartoon style and works in pencils and ink, as well as digitally with his Wacom Cintiq. Among clients, he's known for being professional, versatile, and prompt, on top of being highly skilled. In his career, Santy has won acclaim as the Best Spanish Young Editorial Cartoonist and Best Galician Caricaturist, among others. He founded the BAOBAB Studio Artists' Collective and has been chairman of the AGPI (Galician Professional Illustrators Association) for 6 years.Santy has reached his forties enjoying his work, and he aims to keep on doing it for at least another 40 years. If he weren't an artist, he figures he'd probably be boring his pupils as a university professor.