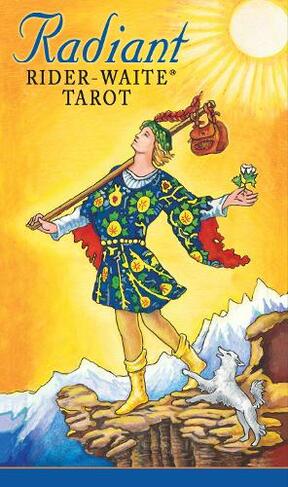 The classic tarot deck, reimagined for the modern era by Virginijus Poshkus. The renowned Original Rider Waite Tarot Deck, designed over a hundred years ago, has been hugely popular for decades. The Radiant Rider-Waite Tarot Deck is a recoloured version of the Original Rider Waite Tarot Deck. Its jewel-like colours highlight the traditional symbolism that readers rely on for insightful readings, and bring new energy, radiance and depth to guide you. The deck includes an instruction booklet with an Introduction by Stuart R. Kaplan.

A.E. Waite was the designer and co-creator of the now famous Rider Waite Tarot deck.An American-born British poet and scholarly mystic, his strong interest in all esoteric matters - divination, magic, Kabbalism, alchemy and Freemasony - led to him penning a number of books. These include the Key to the Tarot, The Book of Ceremonial Magic and A New Encyclopedia of Freemasony.Pamela Colman Smith was born in England to American parents. Her childhood years were spent between London, New York and Kingston, Jamaica. She became a theatrical designer, even collaborating with the notable W.B. Yeats on stage designs. She was an illustrator mainly of books, pamphlets and posters too.Under the guidance of A. E. Waite, she undertook a series of seventy-eight allegorical paintings described by Waite as a 'rectified' tarot pack. The designs, published in the same year by William Rider and Son, exemplify the mysticism, ritual, imagination, fantasy and deep emotions of the artist. Virginijus Poshkus has retouched this version of the Original Rider Waite Tarot Deck and is the illustrator of a number of different card collections.