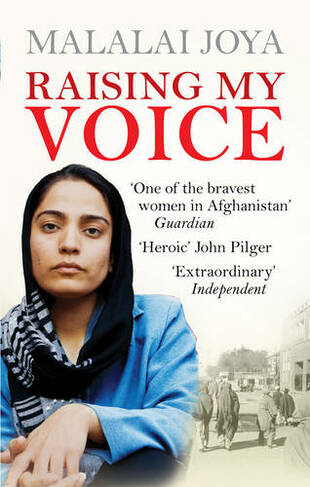 Raising my Voice: The extraordinary story of the Afghan woman who dares to speak out

Malalai Joya is the youngest and most famous female MP in Afghanistan, whose bravery and vision have won her an international following. She made world headlines with her very first speech, in which she courageously denounced the presence of warlords in the new Afghan government. She has spoken out for justice ever since, and for the rights of women in the country she loves. Raising My Voice shares her extraordinary story. Born during the Russian invasion and spending her youth in refugee camps, Malalai Joya describes how she first became a political activist. When she returned to Afghanistan, the country was under the grip of the Taliban and she ran a secret school for girls. A popular MP with her constituents, she received global support when she was suspended from parliament in 2007 because of her forthright views. Malalai Joya's work has brought her awards and death threats in equal measure. She lives in constant danger. In this gripping account, she reveals the truth about life in a country embroiled in war - especially for the women - and speaks candidly about the future of Afghanistan, a future that has implications for us all.

Malalai Joya was four days old when the Soviet Union invaded Afghanistan. Following a childhood spent in refugee camps in Iran and Pakistan she returned to Taliban-ruled Afghanistan in the late 90s and worked for underground organisations promoting the cause of women. In 2005 she was elected to the new parliament, making international headlines when she delivered her historic speech (see above). Since then, she has survived four assassination attempts and continued to press the cause of those who elected her. She received the International Human Rights in Film Award at Berlin in 2007, and was awarded the Anna Politkovskaya Award in 2008. Visit her website: malalaijoya.com