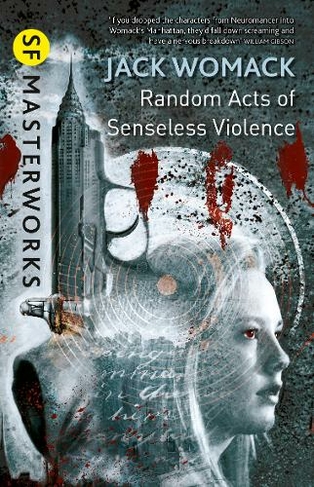 By Jack Womack (Author)
Paperback
https://www.whsmith.co.uk/products/random-acts-of-senseless-violence/jack-womack/paperback/9780575132306-12-000.html £7.37 rrp £8.99 Save £1.62 (18%)
GBP
Availability
In Stock
Free Delivery Available When You Spend £25 Or More
Details
Spend £25 On Products To Receive Free Standard Delivery To Your Home Or Free Next Working Day Click And Collect To Store
Share

It's just a little later than now and Lola Hart is writing her life in a diary. She's a nice middle-class girl on the verge of her teens who schools at the calm end of town. A normal, happy, girl. But in a disintegrating New York she is a dying breed. War is breaking out on Long Island, the army boys are flamethrowing the streets, five Presidents have been assassinated in a year. No one notices any more. Soon Lola and her family must move over to the Lower East side - Loisaida - to the Pit and the new language of violence of the streets. The metamorphosis of the nice Lola Hart into the new model Lola has begun ...

Jack Womack was born in Kentucky in 1956 but currently lives in New York City. In addition to his writing, he has worked in publicity for a number of major US publishers such as HarperCollins and Orbit. Exploring themes such as urban breakdown, racial tension and class wars, the city of New York plays a large part in the post-Cyberpunk, near-future setting of his novels. He won the 1993 PHILIP K. DICK AWARD with ELVISSEY and has the distinction of being William Gibson's favourite author.