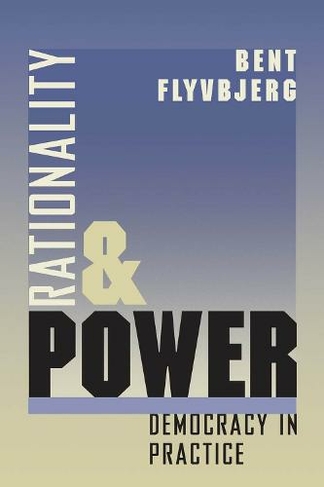 In the Enlightenment tradition, rationality is considered well-defined, independent of context; we know what rationality is, and its meaning is constant across time and space. However, Bent Flyvbjerg argues that rationality is context-dependent and that the crucial context is determined by decision-makers' political power. Flyvbjerg takes us behind the scenes to uncover the real politics - and real rationality - of public administration and planning in an internationally acclaimed project for environmental improvement in the Danish city of Aalborg. The result is a narrative that is both concrete and general, current and timeless. Drawing on the ideas of Machiavelli, Nietzsche, Habermas, and Foucault, Flyvbjerg reads the Aalborg case as a metaphor of modernity and of modern politics. Flyvbjerg shows how power actually distorted policy deliberation over a policy aimed at, among other things, reducing auto traffic in downtown Aalborg. He demonstrates how modern "rationality" can only be an ideal when confronted with the real rationalities involved in decision-making by administrators and policy makers. Flyvbjerg then elaborates on how this problem can be avoided so that fruitful deliberation and action can occur. 1 map, 1 line drawing