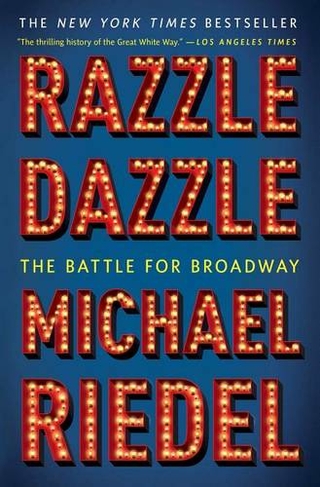 Razzle Dazzle: The Battle for Broadway

"A vivid page-turner" (NPR) detailing the rise, fall, and redemption of Broadway-its stars, its biggest shows, its producers, and all the drama, intrigue, and power plays that happened behind the scenes. "A rich, lovely, debut history of New York theater in the 1970s and eighties" (Kirkus Reviews, starred review), Razzle Dazzle is a narrative account of the people and the money and the power that turned New York's gritty back alleys and sex-shops into the glitzy, dazzling Great White Way. In the mid-1970s Times Square was the seedy symbol of New York's economic decline. Its once shining star, the renowned Shubert Organization, was losing theaters to make way for parking lots and losing money. Bernard Jacobs and Jerry Schoenfeld, two ambitious board members, saw the crumbling company was ripe for takeover and staged a coup and staved off corporate intrigue, personal betrayals and criminal investigations. Once Jacobs and Schoenfeld solidified their power, they turned a collapsed theater-owning holding company into one of the most successful entertainment empires in the world, spearheading the revitalization of Broadway and the renewal of Times Square. "For those interested in the business behind the greasepaint, at a riveting time in Broadway's and New York's history, this is the ticket" (USA TODAY). Michael Riedel tells the stories of the Shubert Organization and the shows that re-built a city in grand style-including Cats, A Chorus Line, and Mamma Mia!-revealing the backstage drama that often rivaled what transpired onstage, exposing bitter rivalries, unlikely alliances, and inside gossip. "The trouble with Razzle Dazzle is...you can't put the damn thing down" (Huffington Post). 2x8pg b&w inserts

Michael Riedel has been the theater columnist for the New York Post since 1998. New York magazine has called his column a "must-read" for the theater world. Michael began his radio career as regular on the Imus in the Morning show in 2011. In 2017 WOR, New York's oldest and highest-rated station, asked him to cohost its morning show with well-known sportscaster Len Berman. The Len Berman and Michael Riedel in the Morning show is the highest-rated morning radio program in the New York City area. Michael's book Razzle Dazzle: The Battle for Broadway won the Marfield Prize for arts writing in 2015 and is widely considered to be the successor to William Goldman's celebrated 1967 book about Broadway, The Season. A graduate of Columbia University, Michael lives in the West Village.