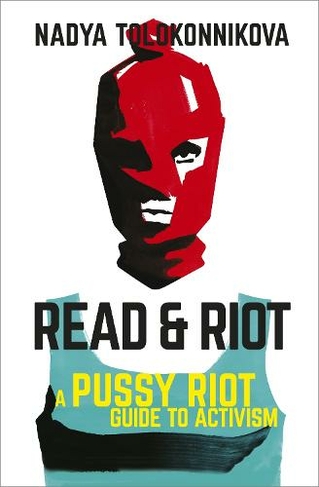 Read and Riot: A Pussy Riot Guide to Activism

By Nadya Tolokonnikova (Author)
Paperback
https://www.whsmith.co.uk/products/read-and-riot-a-pussy-riot-guide-to-activism/nadya-tolokonnikova/paperback/9781529393149-12-000.html £8.19 rrp £9.99 Save £1.80 (18%)
GBP
Availability
In Stock
Free Delivery Available When You Spend £25 Or More
Details
Spend £25 on eligible products to receive free standard delivery to home or free next working day click and collect to store
Share

"as indispensable to confronting, say, your domineering mother-in-law or your local city council as it is to helping foment an ongoing and ever-escalating insurrection against, say, a sexist, racist, nepotistic power-mad oligarchy threatening to destroy democracy as we know it...My advice: Buy one" - VOGUE A guerrilla guide to radical protest and joyful political resistance from artist, activist and Pussy Riot founder Nadya Tolokonnikova. The face of modern protest is wearing a brightly colored ski mask. Nadya Tolokonnikova, founding member of the Russian activist group Pussy Riot, is a creative activist, professional protestor, brazen feminist, shocking visual artist, and force to be reckoned with. Her spontaneous, explosive approach to political action has involved jumping over barbed wire, kissing police officers, giving guerilla performances in crowded subway cars, and going on a hunger strike to protest the abuse of prisoners. She's been horse-whipped by police in Sochi, temporarily blinded when officers threw green paint in her eyes, and monitored by the Russian government. But what made Nadya an activist icon overnight happened on February 21, 2012, when she was arrested for performing an anti-Putin protest song in a Moscow church. She was sent to a Russian prison for 18 months and emerged as an international symbol of radical resistance, as calls to "Free Pussy Riot" resounded around the world. With her emblematic ski mask, black lipstick, and unwavering bravery, Nadya has become an emissary of hope and optimism despite overwhelming and ugly political corruption. Read & Riot is structured around Nadya's ten rules for revolution (Be a pirate! Make your government shit its pants! Take back the joy!) and illustrated throughout with stunning examples from her extraordinary life and the philosophies of other revolutionary rebels throughout history. Rooted in action and going beyond the typical "call your senator" guidelines, Read & Riot gives us a refreshing model for civil disobedience, and encourages our right to question every status quo and make political action exciting--even joyful.

Nadya Tolokonnikova is an artist, political activist, and founding member of Pussy Riot, the punk-rock art collective that garnered international headlines, and support, after several members were sent to jail following a performance in the Moscow Cathedral of Christ the Savior. Tolokonnikova is the recipient of the LennonOno Grant for Peace and corecipient of the Hannah Ardent Prize for Political Thought. In 2013, she founded Zona Prava, a prisoners' rights organization. Later, she started MediaZona, an independent news service now partnered with the Guardian.