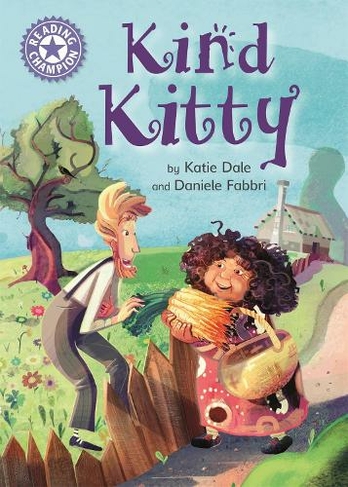 This story is part of Reading Champion, a series carefully linked to book bands to encourage independent reading skills, developed with Dr Sue Bodman and Glen Franklin of UCL Institute of Education (IOE) Kitty loves to make people happy. When she sets off to buy apples to bake a pie for her son, she winds up helping many people along the way, including a needy donkey! Learn about empathy, generosity and the power of modelling kindness with this beautifully illustrated story from Katie Dale and Daniele Fabbri. Reading Champion offers independent reading books for children to practise and reinforce their developing reading skills. Fantastic, original stories are accompanied by engaging artwork and a reading activity. Each book has been carefully graded so that it can be matched to a child's reading ability, encouraging reading for pleasure.

Katie Dale (Author) Katie Dale had her first poem 'The Fate of The School Hamster' published in The Cadbury's Book of Children's Poetry, aged 8 and hasn't stopped writing since. On graduating, she went travelling through South-East Asia - only to discover whilst in a Vietnam internet cafe that she was a winner of the SCBWI 2008 Undiscovered Voices competition.Daniele Fabbri (Illustrator) Daniele Fabbri (Born in Ravenna, 1978) lives in Reggio Emilia, Italy, and lived in America, England, France and Germany ,where he worked in advertising, publishing, children's books, magazines and animation. In 2008 he won the competition for illustrators Academy Pictor. In 2011 he won first prize in the "Language Learner Literature Award". In 2011 he was Selected for Illustrators Annual 2011. He works closely with the association of independent artists in Bologna Artha.