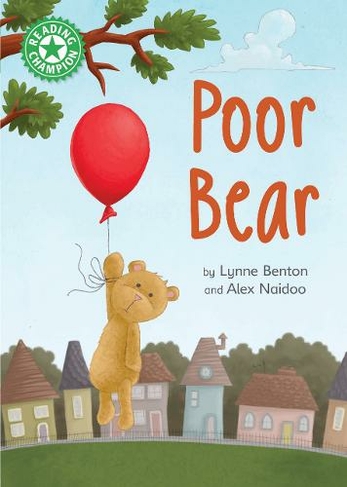 In this story, it is Amy's turn to take home Bear, the class mascot. She really wants him to have a good time and they have lots of adventures. But it might be a little too exciting for Bear... and Dad! Reading Champion offers independent reading books for children to practise and reinforce their developing reading skills. Fantastic, original stories are accompanied by engaging artwork and a reading activity. Each book has been carefully graded so that it can be matched to a child's reading ability, encouraging reading for pleasure. Independent Reading Green stories are perfect for children aged 4+ who are reading at book band 5 (Green) in classroom reading lessons.

Lynne Benton was born in Bournemouth, but moved to Bath at 18 to train as a teacher, and has lived there ever since. She has taught in several primary schools in the area, as well as working as pianist and receptionist in a dancing school and bringing up four children. In 1982 she and her husband, Robin, a fellow-teacher and composer, co-wrote a musical play for primary schools based on the story of Jason and the Golden Fleece (still, happily, in print) but it was only when their children began leaving home for university that she began writing seriously. In 1996 she was a prizewinner in the Independent's Children's Story of the Year competition, and since then has had several fiction books published. As well as writing longer novels for older children she enjoys writing humorous "bite-size" stories for younger ones. She welcomes invitations to go into schools and talk to children about her books, since it keeps her in touch with her readers, who she finds a continual source of inspiration. Alex Naidoo is a London based artist, illustrator, designer and author, a qualified and experienced teacher and holds a Masters Degree in Digital Media. She is at her happiest when wearing fluffyslippers, doodling and within reach of a giant mug of tea. She works mainly as a digital artist, but willfrequently whip out a sketchpad and start scribbling when queuing in shops, waiting for the bus, orwhen hit by sudden inspiration in the middle of the night. She lives with her partner and their two sons,and they are a family of stationary addicts, bookworms and chocoholics.