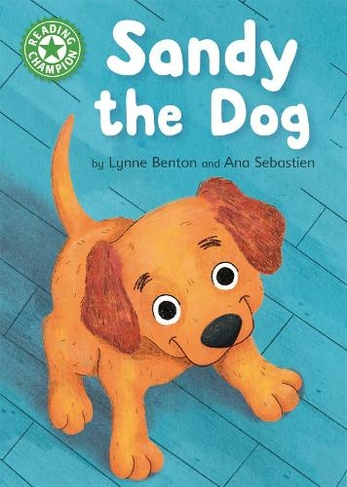 This story is part of Reading Champion, a series carefully linked to book bands to encourage independent reading skills, developed with Dr Sue Bodman and Glen Franklin of UCL Institute of Education (IOE) Sandy the dog is busy training the family to become the perfect dog owners! Reading Champion offers independent reading books for children to practise and reinforce their developing reading skills. Fantastic, original stories are accompanied by engaging artwork and a reading activity. Each book has been carefully graded so that it can be matched to a child's reading ability, encouraging reading for pleasure.

Lynne Benton (Author) Lynne Benton was born in Bournemouth, but moved to Bath at 18 to train as a teacher, and has lived there ever since. She has taught in several primary schools in the area, as well as working as pianist and receptionist in a dancing school and bringing up four children. In 1982 she and her husband, Robin, a fellow-teacher and composer, co-wrote a musical play for primary schools based on the story of Jason and the Golden Fleece (still, happily, in print) but it was only when their children began leaving home for university that she began writing seriously. In 1996 she was a prizewinner in the Independent's Children's Story of the Year competition, and since then has had several fiction books published. As well as writing longer novels for older children she enjoys writing humorous "bite-size" stories for younger ones. She welcomes invitations to go into schools and talk to children about her books, since it keeps her in touch with her readers, who she finds a continual source of inspiration.Ana Sebastien (Illustrator) My name is Ana Sebastian, but I'm also known as Pebbles. I'm an spanish illustrator based in Madrid.I've studied Fine Arts at University of Zaragoza and Universite Michel de Montaigne, Bordeaux.I specialized in Illustration and completed my formation with a master's degree in digital illustration for concept art and visual development.