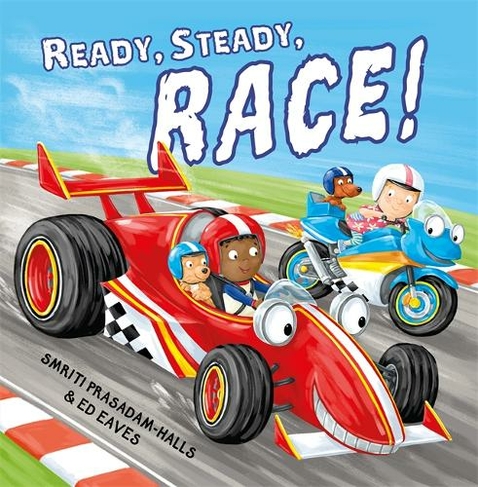 A bouncy, rhythmic story, packed with noises to shout out loud - essential for young vehicle lovers! With art by the bestselling illustrator of How to Grow a Dinosaur. Welcome, welcome, champion racers, Mighty motors, speedy chasers. Who will win this fast and furious race? Join Race Car Rani, Jonas Jet, Speedboat Sam and friends as they zoom towards the finish line across land, sea and sky. Ed Eaves is the illustrator of the bestselling How to Grow a Dinosaur and has been nominated for the Red House Children's Book Award.

Smriti Prasadam-Halls (Author) Smriti Prasadam-Halls is the author of over 25 books for children. Her I Love You Night and Day was read on CBeebies Bedtime Hour and her Black and White Sparklers series has sold more than 250,000 copies worldwide. She lives in Richmond with her husband and three sons.Edward Eaves (Illustrator) Ed Eaves was born in the West Midlands and went to Kingston University where he got a First Class Honours Degree in Illustration. He is a young, upcoming illustrator who is also working on titles for Little Tiger Press and Puffin. Fairy Tale Secrets, written by Marion Rose (September 03), is Ed's first book. Fairy Tale Secrets reveals what those fairy tale characters get up to when everyone's back is turned. Ed's bright and cheeky illustrations perfectly complement Marion's witty rhymes. Ed claims that he is 'still a big kid really' which explains his interest in video games, old toys and comics. He also enjoys golf and walking and has been on drawing trips to Madrid and Budapest. Edward lives in Solihull, in the West Midlands.