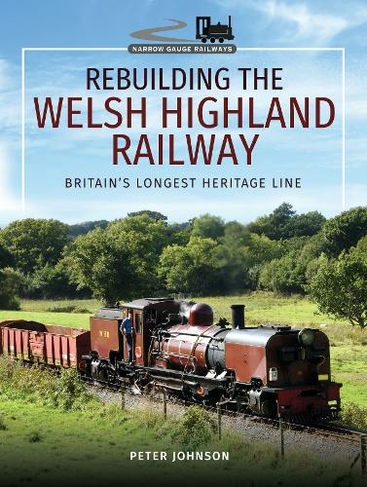 By Peter Johnson (Author)
Hardback
https://www.whsmith.co.uk/products/rebuilding-the-welsh-highland-railway-britains-longest-heritage-line/peter-johnson/hardback/9781473827271-12-000.html £24.00 rrp £30.00 Save £6.00 (20%)
GBP
Availability
Available / dispatched within 1 - 2 weeks
Free Delivery Available When You Spend £25 Or More
Details
Spend £25 On Products To Receive Free Standard Delivery To Your Home Or Free Next Working Day Click And Collect To Store
Share

THE REVIVAL AND RESTORATION of the Welsh Highland Railway is one of the greatest heritage railway achievements of the 21st Century, yet its success followed more than one hundred years of failure. Supported by public loans, its first incarnation combined the moribund North Wales Narrow Gauge Railways, some of the abandoned works of the Portmadoc, Beddgelert & South Snowdon Railway and part of the horse-worked Croesor Tramway. Opened in 1923, it was closed in 1937 and the track was lifted in 1941. Serious talk of revival started in the 1960s but restoration did not start until 1997, with the neighbouring Ffestiniog Railway at the helm, supported by generous donors and benefactors, the Millennium Commission, the Welsh Government and teams of enthusiastic volunteers. Author Peter Johnson steers a course through the railway's complicated pre-history before describing the events, including a court hearing, three public inquiries and a great deal of controversy, leading to the start of services between Caernarfon and Porthmadog in 2011. A postscript describes post-completion developments. 125 colour & 125 black and white illustrations

PETER JOHNSON is the author of more than 30 books, mainly about Welsh and narrow-gauge railways.His association with the Ffestiniog Railway, as editor of the Ffestiniog Railway Society's quarterly magazine (1974-2003), as a director of the Ffestiniog Railway Society (1992-2003) and in drafting the company's Welsh Highland Railway Transport & Works Order, and as the compiler of a narrow-gauge railway news column for one of the mainstream British railway magazines since 1995, has put him in a good position to compile this story of the Welsh Highland Railway's history and its revival, his third title for Pen & Sword Transport.