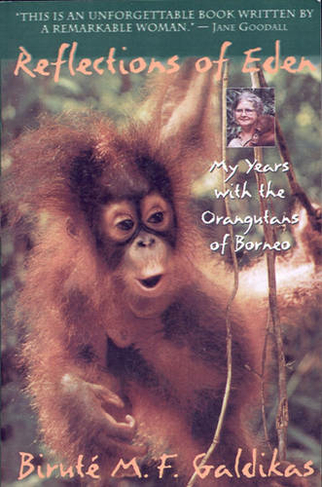 Reflections of Eden: My Years with the Orangutans of Borneo

Ever since Jane Goodall unlocked the mysteries of wild chimpanzees, and Dian Fossey lived among mountain gorillas, the world has been captivated by primates and the people who study them. Here, at last, is the riveting story of Birute Galdikas, a pioneering primatologist who has spent much of her life studying orangutans. In 1971, twenty-five-year-old Galdikas began living in the remote jungles of Indonesian Borneo, where she encountered menacing poachers, blood-sucking leeches, and swarms of carnivorous insects. Determined to penetrate the world of the elusive "red ape" in the name of science and conservation, Galdikas embarked on a quest of more than twenty years to become the foremost chronicler of orangutan life.Her first task was to forge a bond of trust with the animals, but her initial forays into their world were thwarted by skeptical and territorial orangutans like handsome Cara, who hurled dead branches at Galdikas from the tree canopy above. Eventually, Galdikas became a surrogate member of the community, triumphantly claimed as "mother" by little Sugito, who clung to her fiercely, night and day, for months. Reflections of Eden is an exotic adventure, a history of vital scientific research, and the memoir of a remarkable woman. illustrations, map