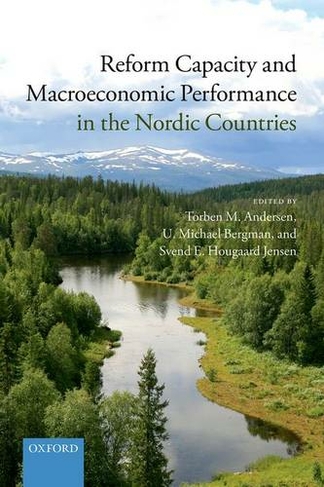 Reform Capacity and Macroeconomic Performance in the Nordic Countries

The outbreak of the financial crisis in 2008 has had significant effects on economic activity, unemployment, and public finances for all European countries. However, European economies do not form a homogenous region, and any serious analysis of macroeconomic imbalances in Europe must account for the fact that different economic and political models and circumstances operate across the continent. This book focuses on the Nordic countries (Denmark, Finland, Iceland, Norway, and Sweden) which have a relatively good record of undertaking fiscal and structural reforms after their own financial and debt crises in the 1980s and 1990s. The Nordic countries are small and open economies, well-known for their high income levels, high employment rates, organized labour markets, a relatively equal distribution of incomes, and large public sectors. From this perspective, the book asks whether there are lessons that might be learned from the Nordic economies. Is there a distinctive Nordic model that could be usefully followed, by other small open economies, in terms of fiscal and monetary policy design, labour market policies and reforms, and financial and housing market regulation? It is inappropriate to define the Nordic model in terms of a common set of policies. Since the key characteristics, including the overarching objectives and supporting institutions, have strong historical foundations, copying and pasting them to other countries is not easily done. Even though the Nordic experiences are not directly transferable, they may add new knowledge about the importance of institutional design, fiscal consolidation, and structural reforms not only for macroeconomic performance but also for how to preserve key objectives such as social balance and equity. Figures and Tables

Torben M. Andersen is Professor at the School of Economics and Management. He received his PhD from CORE, Universite Catholique de Louvain, Belgium, 1986, and holds a Lic. Oecon (1984) from University of Aarhus, and a MSc, from London School of Economics 1981. His primary research and teaching interests are in the economics of the welfare state, labour economics, and fiscal policy. He is affiliated to a number of research institutions including CEPR (London),CESifo (Munich), IZA (Bonn), and SNS (Stockholm).Michael Bergman is currently an Associate Professor at the Department of Economics at the University of Copenhagen, Denmark. He previously served as a Member of the Swedish Fiscal Policy Council (2007-2012). Dr. Bergman's fields of research are macroeconomics and international finance. He has published several articles on business cycles, fiscal policy and exchange rates as well as the European Monetary Union.Svend E. Hougaard Jensen currently works as a Professor of Economics at Copenhagen Business School. On leave from academia, he has served as head of the Division of Economic Analysis within the Danish Ministry of Economic and Business Affairs. His research has focused on topics such as macroeconomic effects of changing demographics, intergenerational (re)distribution, sustainability of public debt, monetary unification and fiscal policy, structural reforms and macroeconomic performance. He haspublished numerous articles in learned journals and books, and he is the author/editor of several books.