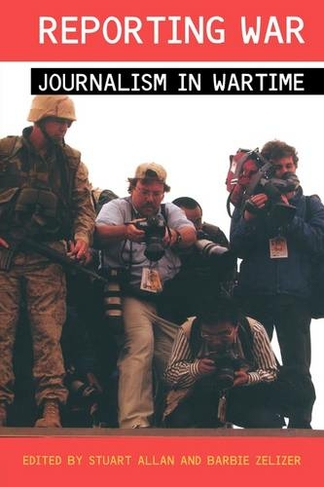 Also available on eBook for £22.19. Click here to purchase from Rakuten Kobo

Reporting War explores the social responsibilities of the journalist during times of military conflict. News media treatments of international crises, especially the one underway in Iraq, are increasingly becoming the subject of public controversy, and discussion is urgently needed. Each of this book's contributors challenges familiar assumptions about war reporting from a distinctive perspective. An array of pressing issues associated with conflicts over recent years are identified and critiqued, always with an eye to what they can tell us about improving journalism today. Special attention is devoted to recent changes in journalistic forms and practices, and the ways in which they are shaping the visual culture of war, and issues discussed, amongst many, include: the influence of censorship and propaganda 'us' and 'them' news narratives access to sources '24/7 rolling news' and the 'CNN effect' military jargon (such as 'friendly fire' and 'collateral damage') 'embedded' and 'unilateral' reporters tensions between objectivity and patriotism. The book raises important questions about the very future of journalism during wartime, questions which demand public dialogue and debate, and is essential reading for students taking courses in news and news journalism, as well as for researchers, teachers and practitioners in the field. 10 Tables, black and white; 8 Illustrations, black and white

Stuart Allan is a lecturer in the School of Cultural Studies at the University of the West of England. His books include News Culture (Open U 1999) and Media, Risk and Science. (Open U.P. 2002) He edits the series Issues in Cultural and Media Studies for Open U. P., now McGraw-Hill. He has co-edited a number of collections including News, Gender and Power (Routledge 1998), Environmental Risks and the Media (Routledge 2000) and Journalism after September 11 (with Barbie Zelizer) Routledge 2002.Barbie Zelizer is the Raymond Williams Professor of Communication at the Annenberg School of Communication in Philadelphia. She is the author of several books on journalism, popular culture and coll-ective memory, and co-edited Journalism after September 11. She is a founder and co-editor of the Sage journal Journalism: Theory, Practice and Criticism.