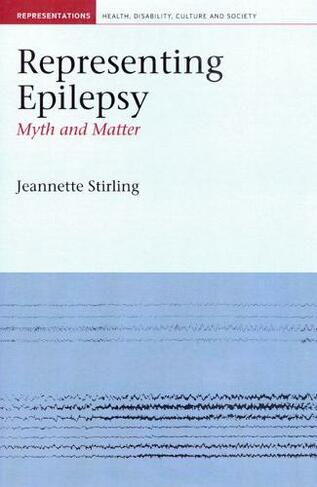 By Jeannette Stirling (Author)
Hardback
https://www.whsmith.co.uk/products/representing-epilepsy-myth-and-matter-representations-health-disability-culture-and-society-4/jeannette-stirling/hardback/9781846312373-01-000.html £85.00
GBP
Availability
Currently unavailable. We don't know when or if this item will be back in stock
With Free Saver Delivery
Details
FREE SHIPPING over £20 for Saver Delivery
Share

At least 50 million people worldwide have epilepsy. Representing Epilepsy, the latest volume in LUP's acclaimed Representations series, seeks to understand the epileptic body as a literary or figurative device intelligible beyond a medical framework. Jeannette Stirling argues that neurological discourse from the late-nineteenth century through to the mid-twentieth century is as much forged by the cultural conditions and representational politics of the times as it is by the science of western medicine. Along the way she explores narratives of epilepsy depicting ideas of social disorder, tainted bloodlines, sexual deviance, spiritualism and criminality in works as diverse as David Copperfield and The X Files. This path-breaking book will be required reading for cultural disability studies scholars and for anyone seeking greater understanding of this common condition. 'Representing Epilepsy offers a clever exploration of the cultural history of this condition, based on an effective interdisciplinary approach. It will be of particular interest to scholars and students in the field of Medical Humanities, as well as to all those involved in the care of people with epilepsy, who wish to improve their understanding of the socio-cultural repercussions of the condition.' Maria Vaccarella, King's College London

Dr Jeannette Stirling is a Lecturer in the Faculty of Arts & Learning Development, University of Wollongong, Australia.