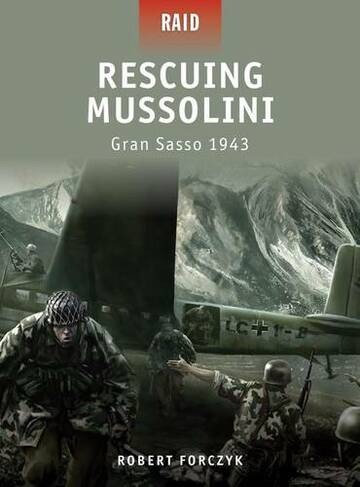 The successful rescue of imprisoned Italian dictator Benito Mussolini from atop the Gran Sasso plateau was one of the most dramatic special forces operations in military history. Arrested by his own officers in July 1943, Mussolini had been whisked away to an isolated and heavily guarded mountaintop resort, the Hotel Campo Imperatore which could only be reached by a heavily guarded cable car station. The Germans, led by SS Haupsturmfuhrer Otto Skorzeny, launched a daring Glider-borne assault, which surprised the Italian guards and secured Mussolini without a shot being fired. However, when the original escape plan had to be scrapped, the Germans organize a desperate, last minute airborne extraction to escape before the Italians could launch a counter attack. Illustrations (some col.)

Dr Robert A. Forczyk has a PhD in International Relations and National Security from the University of Maryland and a strong background in European and Asian military history. He is currently a lieutenant colonel in the US Army Reserves and has served 18 years as an armour officer in the US 2nd and 4th Infantry Divisions and as an intelligence officer in the 29th Infantry Division (Light). He is a well-respected author who has published a number of titles include Panther vs T-34 in Osprey's Duel series. The author lives in Laurel, Maryland.