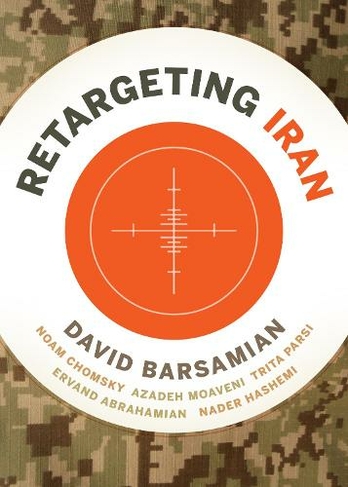 A timely primer on the conflict between the United States and Iran by scholars of Middle Eastern politics who advocate diplomacy and de-escalation. The United States and Iran seem to be permanently locked in a dangerous cycle of brinkmanship and violence. Both countries have staged cyber attacks and recently shot down one another's aircraft. Why do both countries seem intent on escalation? Why did the U.S. abandon the nuclear deal (which, according to the UN, was working)? Where can Washington and Tehran find common ground? To address these questions and the political and historical forces at play, David Barsamian presents the perspectives of Iran scholars Ervand Abrahamian, Noam Chomsky, Nader Hashemi, Azadeh Moaveni, and Trita Parsi. A follow-up to the previously published Targeting Iran, this timely book continues to affirm the goodwill between Iranian and American people, even as their respective governments clash on the international stage. Praise for ReTargeting Iran: "In a Q&A format about the continued demonization of Iran by the U.S., [David] Barsamian gets at the key to the deterioration of the relationship between the two nations. ... [T]he discussion is astute and relevant."-Kirkus Reviews "A necessary and timely education on one of the most politically fraught and historically significant relationships of our time. I devoured these smart, insightful interviews with five important Iran scholars, about the struggle between two countries that have both been our home."-Dina Nayeri, author of The Ungrateful Refugee: What Immigrants Never Tell You "This little book contains more wisdom about Iran than exists in the White House, Congress, the State Department, and the Pentagon combined. Anyone who wants to understand the world's most misunderstood country will find no better source."-Stephen Kinzer, Author of All the Shah's Men: An American Coup and the Roots of Middle East Terror "Many journalists and academics have written books about Iran. But ReTargeting Iran fills an important gap, a book sharply critical of U.S. policy and the Iranian government. David Barsamian provides timely interviews with major analysts that sets the record straight. It's a highly accessible read and a great introduction to the U.S.-Iran conflict."-Reese Erlich, author of The Iran Agenda Today: The Real Story Inside Iran and What's Wrong with U.S. Policy. "ReTargeting Iran is a facts-only objective account of where America has gone wrong, stupidly wrong-yet again-in its foreign policy, dominated by a mythical belief that Iran has an active nuclear weapons program. All one needs to know about the threat is this: as of mid-2020, the United States had no less than thirty-five military bases, manned by 65,000 soldiers, ready go to war in the nations immediately surrounding our feared adversary."-Seymour M. Hersh, author of Reporter: A Memoir No

One of America's most tireless and wide-ranging investigative journalists, David Barsamian has altered the independent media landscape, both with his weekly radio show Alternative Radio-now in its 33rd year-and his books with Noam Chomsky, Eqbal Ahmad, Howard Zinn, Tariq Ali, Richard Wolff, Arundhati Roy and Edward Said. His latest books are with Noam Chomsky: Global Discontents: Rising Threats to Democracy and Edward Said: Culture and Resistance. He lectures on world affairs, imperialism, capitalism, propaganda, the media and global rebellions. David Barsamian is the winner of the Media Education Award, the ACLU's Upton Sinclair Award for independent journalism, and the Cultural Freedom Fellowship from the Lannan Foundation. The Institute for Alternative Journalism named him one of its Top Ten Media Heroes. He is the recipient of Lifetime Achievement Awards from the Rocky Mountain Peace and Justice Center and the South Asian Network for Secularism and Democracy. He has collaborated with the world-renowned Kronos Quartet in events in New York, London, Vienna, San Francisco and elsewhere.Ervand Abrahamian is Distinguished Professor Emeritus of Iranian and Middle Eastern history and politics at Baruch College, City University of New York. He is the author of Iran Between Two Revolutions, A History of Modern Iran, and The Coup: 1953, the CIA, and the Roots of Modern U.S.-Iranian Relations.Noam Chomsky, by any measure, has led a most extraordinary life. In one index he is ranked as the eighth most cited person in history, right up there with Aristotle, Shakespeare, Marx, Plato, and Freud. The legendary MIT professor is a major contributor to the field of linguistics. In addition to his pioneering work in that field, he has been a leading voice for peace and social justice for many decades. Chris Hedges says he is "America's greatest intellectual," who "makes the powerful, as well as their liberal apologists, deeply uncomfortable." He is Institute Professor emeritus in the Department of Linguistics and Philosophy at MIT and Laureate Professor of Linguistics and Haury Chair in Environment and Social Justice at the University of Arizona. Age 91 at the time of this book's interview, he is still active. He is the author of scores of books.Nader Hashemi is the Director of the Center for Middle East Studies at the Josef Korbel School of International Studies at the University of Denver. His articles appear in the New York Times and other newspapers and journals. He is the author of Islam, Secularism and Liberal Democracy and co-editor of The People Reloaded, The Syria Dilemma, and Sectarianization: Mapping the New Politics of the Middle East.Azadeh Moaveni is a journalist, writer, and academic who has been covering the Middle East for over two decades. She started reporting in Cairo in 1999, while on a Fulbright fellowship to the American University in Cairo. For the next several years she reported from throughout the region as Middle East correspondent for Time magazine, based in Tehran, but also covering Lebanon, Syria, Egypt, and Iraq. She is the author of Lipstick Jihad and Honeymoon in Tehran, and co-author, with Shirin Ebadi, of Iran Awakening. In November 2015, she published a front-page article in the New York Times on ISIS women defectors that was a finalist for a Pulitzer Prize. Her writing appears in the Guardian, the New York Times, and the London Review of Books. She teaches journalism at NYU in London, has been a fellow at the New America Foundation, and is now Senior Gender Analyst at the International Crisis Group.Trita Parsi wrote his doctoral thesis on Israeli-Iranian relations at Johns Hopkins University School of Advanced International Studies. He co-founded and served as president of the National Iranian American Council, and is the co-founder and Executive Vice President of the Quincy Institute for Responsible Statecraft. Parsi is the author of Treacherous Alliance: The Secret Dealings of Iran, Israel and the United