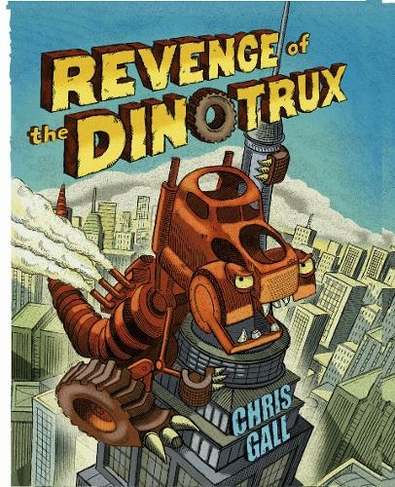 Revenge of the Dinotrux

THE DINOTRUX ARE BACK... AND LOOKING FOR A SNACK! Millions of years ago, DINOTRUX ruled the earth. But in the present day, people rule them! Their rusty fossils have spent decades stuck in a drafty museum surrounded by screaming kids, and now they're ready to break out and let off some really old steam. HONNNK!!! DINOTRUX ARE ON THE LOOSE! Garbageadon eats cars, Craneosaurus peeks in windows, and Tyrannosaurus Trux climbs a skyscraper... Who will win the mighty standoff between man and prehistoric beast? Find out in this rip-roaring sequel to Chris Gall's highly praised Dinotrux, featuring all your favorite trux and some never-before-seen ones!

Chris Gall is the award-winning author and illustrator of Substitute Creacher, Dear Fish, There's Nothing to Do on Mars, and Dinotrux, a Publishers Weekly Best Children's Book of 2009. His books have received numerous starred reviews and awards including a Borders Original Voices Book for 2006 for Dear Fish and a Kirkus Best Children's Book for 2008 for There's Nothing to Do on Mars. Chris has won a multitude of awards from organizations like the Society of Illustrators and Communication Arts Magazine, and is also the illustrator of America the Beautiful, a Publishers Weekly's Best Children's Book of 2004. He lives in Tucson, Arizona.