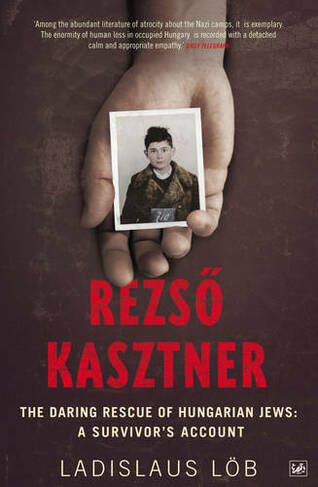 By Ladislaus Lob (Author)
Paperback
https://www.whsmith.co.uk/products/rezso-kasztner-the-daring-rescue-of-hungarian-jews-a-survivors-account/ladislaus-lob/paperback/9781845950088-01-000.html £16.14 rrp £18.99 Save £2.85 (15%)
GBP
Availability
Currently unavailable. We don't know when or if this item will be back in stock
Free Saver Delivery on orders over £20
Details
FREE SHIPPING over £20 for Saver Delivery
Share

Two months after his eleventh birthday, on 9 July 1944, the gates of Bergen-Belsen concentration camp closed behind Ladislaus Loeb. Five months later, with the Second World War still raging, he crossed the border into Switzerland, cold and hungry, but alive and safe. He was not alone, but part of a group of some 1,670 Jewish men, women and children from Hungary, who had been rescued from the Nazis as a result of a deal made by a man called Rezso Kasztner - himself a Hungarian Jew - with Adolf Eichmann, the chief architect of the Holocaust. Twelve years and a miscarriage of justice later Kasztner was murdered by an extremist Jewish gang in his adopted home of Israel. To this day he remains a highly controversial figure, regarded by some as a traitor and by many others as a hero. He was accused of betraying the bulk of the Hungarian Jewry by hand-picking only those who were politically and personally dear to him, or those from whom he could benefit financially, and the judge of his post-war trial concluded that he had 'sold his soul to Satan'. Rezso Kasztner tells his story - and also the story of a child who lived to grow up after the Holocaust thanks to him. A compelling combination of history and memoir, it is also an examination of one individual's unique achievement and a consideration of the profound moral issues raised by his dealings with some of the most evil men ever known.

Ladislaus Loeb is Emeritus Professor of German at the University of Sussex. He was born in Transylvania and spent five months in Bergen-Belsen concentration camp aged eleven. He grew up in Switzerland where he worked as a journalist and teacher before moving to an academic job in Brighton. He has published widely on German and English literature. His translations include Nine Suitcases by Bela Zsolt, Battle for Budapest by Kriszti'an Ungvary and Sex and Character by Otto Weininger.