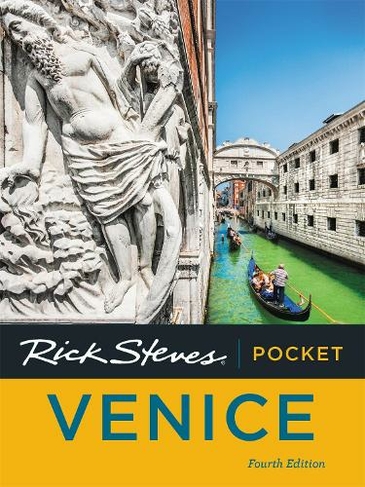 Make the most of every day and every dollar with Rick Steves! This colorful, compact guidebook is perfect for spending a week or less in Venice:City walks and tours: Eight detailed self-guided walks including a Rialto to Frari Church Walk and tours of St. Mark's Basilica and Doge's Palace, plus a Grand Canal Cruise to see the city by vaporettoRick's strategic advice on what's worth your time and moneyWhat to eat and where to stay: Savor calamari at a cicchetti bar, mingle with locals with a Bellini or spritz con Aperol in hand, and stay in a romantic canal-side hotelDay-by-day itineraries to help you prioritize your timeA detailed, detachable fold-out map, plus museum and city maps throughoutFull-color, portable, and slim for exploring on-the-goTrip-planning practicalities like when to go, how to get around, basic Italian phrases, and moreLightweight, yet packed with info on Venice's history and culture, Rick Steves Pocket Venice truly is a tour guide in your pocket.Extending your trip? Try Rick Steves Venice.

Gene Openshaw is a writer, composer, tour guide, and lecturer on art and history. Specializing in writing walking tours of Europe's cultural sights, Gene has coauthored 10 of Rick's books and contributes to Rick's public television series. As a composer, Gene has written a full-length opera (Matter), a violin sonata, and dozens of songs. He lives near Seattle with his daughter, and roots for the Mariners in good times and bad. Since 1973, Rick Steves has spent about four months a year exploring Europe. His mission: to empower Americans to have European trips that are fun, affordable, and culturally broadening. Rick produces a best-selling guidebook series, a public television series, and a public radio show, and organizes small-group tours that take over 30,000 travelers to Europe annually. He does all of this with the help of more than 100 well-traveled staff members at Rick Steves' Europe in Edmonds, WA (near Seattle). When not on the road, Rick is active in his church and with advocacy groups focused on economic and social justice, drug policy reform, and ending hunger. To recharge, Rick plays piano, relaxes at his family cabin in the Cascade Mountains, and spends time with his son Andy and daughter Jackie. Find out more about Rick at www.ricksteves.com and on Facebook.Connect with Rick: facebook.com/RickSteves twitter: @RickStevesinstagram: ricksteveseurope