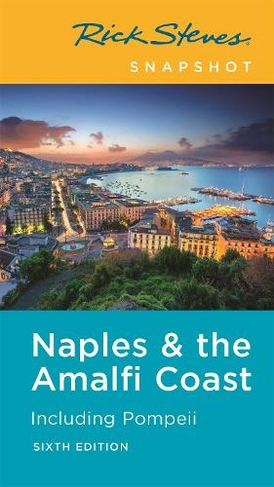 By Rick Steves (Author)
Paperback
https://www.whsmith.co.uk/products/rick-steves-snapshot-naples-and-the-amalfi-coast-sixth-edition-including-pompeii/rick-steves/paperback/9781641712187-12-000.html £8.19 rrp £9.99 Save £1.80 (18%)
GBP
Availability
In Stock
Free Delivery Available When You Spend £25 Or More
Details
Spend £25 on eligible products to receive free standard delivery to home or free next working day click and collect to store
Share

With Rick Steves, Naples and the Amalfi Coast are yours to discover! This slim guide excerpted from Rick Steves Italy includes: *Rick's firsthand, up-to-date advice on the Amalfi Coast's best sights, restaurants, hotels, and more, plus tips to beat the crowds, skip the lines, and avoid tourist traps *Top sights and local experiences: See ancient art at Naples' Archaeological Museum or travel back in time at the Pompeii Forum. Relax on the beach in Positano, go for a cliffside stroll along the coast, or feast on pizza where the dish was first created *Helpful maps and self-guided walking tours to keep you on track With selective coverage and Rick's trusted insight into the best things to do and see, Rick Steves Snapshot Naples & the Amalfi Coast is truly a tour guide in your pocket. Exploring beyond the Amalfi Coast? Pick up Rick Steves Italy 2020 for comprehensive coverage, detailed itineraries, and essential information for planning a countrywide trip.

Since 1973, Rick Steves has spent about four months a year exploring Europe. His mission: to empower Americans to have European trips that are fun, affordable and culturally broadening. Rick produces a best-selling guidebook series, a public television series, and a public radio show, and organises small-group tours that take over 30,000 travellers to Europe annually. He does all of this with the help of more than 100 well-travelled staff members at Rick Steves' Europe in Edmonds, WA (near Seattle).