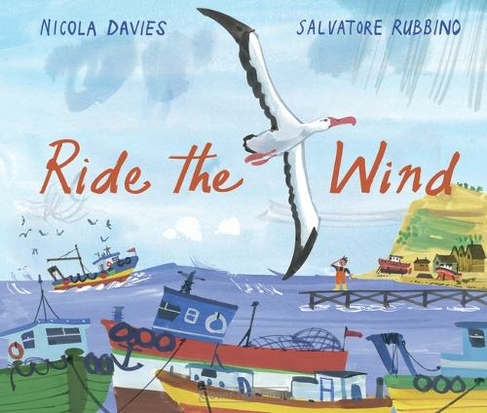 By Nicola Davies (Author), Salvatore Rubbino (Illustrator)
Hardback
https://www.whsmith.co.uk/products/ride-the-wind/nicola-davies/salvatore-rubbino/hardback/9781406379556-12-000.html £10.65 rrp £12.99 Save £2.34 (18%)
GBP
Availability
In Stock
Free Delivery Available When You Spend £25 Or More
Details
Spend £25 On Products To Receive Free Standard Delivery To Your Home Or Free Next Working Day Click And Collect To Store
Share

A beautiful, heartfelt story from the author of King of the Sky and The Promise. Javier has a secret. On one of his father's fishing-trips, he finds an albatross caught on the hooks; alive, if only barely. Against his father's orders, Javier smuggles the bird to safety and begins nursing it back to health. Every day, the albatross accepts a little more food - but she shows no sign of wanting to use her wings. And if Javier's new friend refuses to fly, how will she ever find her way home? With words by award-winning author Nicola Davies and dramatic watercolours by Salvatore Rubbino, this is the story of a boy, a bird and the meaning of home. "Nicola Davies is one of the best children's writers in the business." Huffington Post

Nicola Davies is an award-winning author, whose many books for children include A First Book of Nature, A First Book of the Sea, Tiny, Lots, The Promise, King of the Sky, Ice Bear, Big Blue Whale and the Ariki series. She graduated in zoology, studied whales and bats and then worked for the BBC Natural History Unit. In 2017, she became the first ever recipient of the SLA's Award for Outstanding Contribution to Information Books. She lives in Wales. Visit Nicola at www.nicola-davies.com, or follow her on Twitter under the handle @nicolakidsbooks.Salvatore Rubbino's first book for children, A Walk in New York, was shortlisted for the V&A Illustration Awards; his second, A Walk in London, won an SLA Information Book Award; his third, Just Ducks! (written by Nicola Davies), was shortlisted for the Kate Greenaway Medal; his fourth, A Walk in Paris, won the IBW children's book award; and his fifth, Our Very Own Dog, won an SLA Award. Salvatore teaches on the MA Children's Book Illustration course at Cambridge School of Art and at Southampton Solent University. He lives in London, E15.