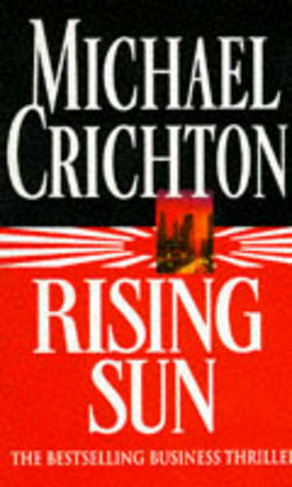 On the forty-fifth floor of the Nakamoto Tower in downtown L. A. a grand opening celebration is in full swing at the new American headquarters of the immense Japanese conglomerate. On the forty-sixth floor, in an empty conference room, the dead body of a beautiful woman is discovered. The investigation immediately becomes a thrilling chase through a twisting maze of industrial intrigue, a no-holds barred conflict in which control of a vital American technology is the fiercely coveted prize - and the Japanese saying 'business is war' takes on a terrifying reality. Rising Sun is a powerful, compulsive thriller from a master of the genre.

Born in Chicago in 1942, Michael Crichton first trained as a doctor before going on to become one of the most successful writers in the world. In 1994 he achieved a feat unmatched by any other writer: by having simultaneously a number one TV series, book and movie with, respectively, ER (which he created), Disclosure and Steven Spielberg's Jurassic Park, on its release the highest-grossing film of all time. He also directed several movies, including The Great Railway Robbery with Sean Connery and Donald Sutherland. His high-concept thrillers were international bestsellers, and in total his books have sold more than 200 million copies worldwide. He died in 2008.