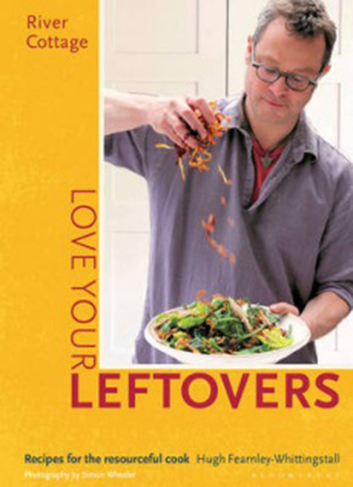 River Cottage Love Your Leftovers: Recipes for the resourceful cook

p.p1 {margin: 0.0px 0.0px 0.0px 0.0px; font: 13.0px Helvetica; color: #000000} Everyone occasionally finds themselves with a bag of wilting salad in the fridge or a hunk of bread that can't even be revived with toasting, but before you throw away those bendy carrots or that slightly sour milk, let Hugh Fearnley-Whittingstall show you what flavoursome meals can be whipped up with your languishing ingredients. In this pocket bible, Hugh Fearnley-Whittingstall offers nifty and creative ideas to transform leftovers into irresistible meals. Hugh starts by giving practical advice for cooking on a weekly basis with leftovers in mind - helping to save money and avoid waste - and provides tips on how best to store your ingredients to make them last for as long as possible. Hugh shares handy recipe templates that can be applied to all kinds of leftover ingredients, and provides simple and flexible recipes. He shows, for instance, how you can transform leftover meat into Chilli beef noodles, Stew enchiladas, Spicy chicken salad with peanut butter dressing; surplus root vegetables into Roast root hummus, Quick lentil and parsnip curry and Beetroot and caraway seed cake; vegetable peelings into a quick-and-easy stock. p.p1 {margin: 0.0px 0.0px 0.0px 0.0px; font: 14.0px Helvetica; color: #000000} Featuring a section dedicated to storecupboard ingredients, ideal for anyone looking for inspiration at the back of their shelves.

Hugh Fearnley-Whittingstall is a writer, broadcaster and campaigner. His series for Channel 4 have earned him a huge popular following, while his River Cottage books have collected multiple awards including the Glenfiddich Trophy and the Andre Simon Food Book of the Year. Hugh's additional broadcasting, like the hugely influential Fish Fight, has earned him a BAFTA as well as awards from Radio 4, the Observer and the Guild of Food Writers. Hugh lives in Devon with his family.rivercottage.net / @rivercottage