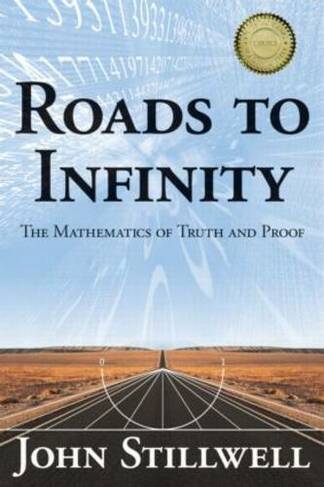 Roads to Infinity: The Mathematics of Truth and Proof

Winner of a CHOICE Outstanding Academic Title Award for 2011! This book offers an introduction to modern ideas about infinity and their implications for mathematics. It unifies ideas from set theory and mathematical logic, and traces their effects on mainstream mathematical topics of today, such as number theory and combinatorics. The treatment is historical and partly informal, but with due attention to the subtleties of the subject. Ideas are shown to evolve from natural mathematical questions about the nature of infinity and the nature of proof, set against a background of broader questions and developments in mathematics. A particular aim of the book is to acknowledge some important but neglected figures in the history of infinity, such as Post and Gentzen, alongside the recognized giants Cantor and Goedel. BOOK HAS CRC ON JACKET & TITLE PG; BOOK HAS DUST JACKET - ALL ARCHIVED

John Stillwell was born in Melbourne, Australia in 1942 and educated at Melbourne High School, the University of Melbourne (M.Sc. 1965), and MIT (Ph.D. 1970). From 1970 to 2001 he taught at Monash University in Melbourne, and since 2002 he has been Professor of Mathematics at the University of San Francisco. He has been an invited speaker at several international conferences, including the International Congress of Mathematicians in Zurich 1994. His works cover a wide spectrum of mathematics, from translations of classics by Dirichlet, Dedekind, Poincare, and Dehn to books on algebra, geometry, topology, number theory, and their history. For his expository writing he was awarded the Chauvenet Prize of the Mathematical Association of America in 2005, and the AJCU National Book Award in 2009. Recent titles by Stillwell include Yearning for the Impossible, Mathematics and Its History, The Four Pillars of Geometry, and Geometry of Surfaces.