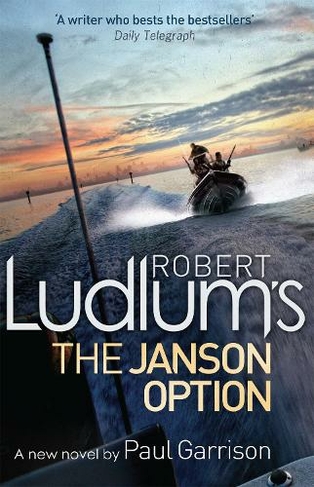 Paul Janson returns in a thrilling new adventure... Paul Janson has set a new mission for himself. In partnership with champion sharpshooter Jessica Kincaid, he rehabilitates disenchanted agents, helping them to create new lives outside the violent intelligence sector. But he still takes on independent assignments - for a fee. So when an oil executive begs Janson to rescue his wife, Allegra, from Somali pirates, Janson and Kincaid take on the case. However, pirates are the least of their worries in the violent chaos of oil-rich East Africa. And when Janson and Kincaid stumble into a bewildering storm of plots and counter plots, they begin to fear the only way to escape would be to abandon the kidnapped Allegra.

Robert Ludlum is one of the world's bestselling authors and there are more than 300 million copies of his books in print. He is published in 32 languages and 50 countries. As well as blending sophisticated plotting and extreme pace, Robert Ludlum's novels are meticulously researched. In addition to the popular titles in the Covert-One series, Robert Ludlum's best-known books include THE SCARLATTI INHERITANCE, THE CHANCELLOR MANUSCRIPT and the Jason Bourne series.Paul Garrison is the author of the critically acclaimed thrillers FIRE AND ICE, RED SKY AT MORNING, BURIED AT SEA, SEA HUNTER and THE RIPPLE EFFECT. He is currently writing the next novel in the new Paul Janson series.