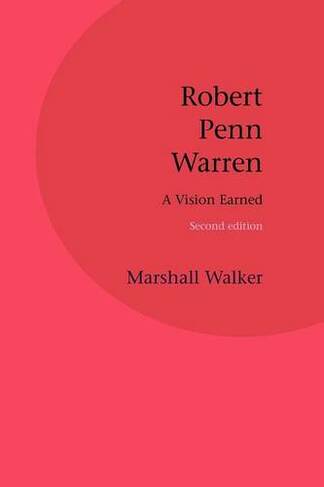 Best known as author of All the King's Men, Robert Penn Warren has been called 'the pentathlon champion' of American literature. In an age of specialization he published, over a period of some sixty years, biography, ten novels, short stories, poetry in several kinds, major criticism, socio-historical comment and a play. Deeply a Southerner, he emerged as the most versatile and productive member of the Fugitive Group who met in Nashville, Tennessee between 1915 and 1928 and included Allen Tate and John Crowe Ransom. As Tate predicted after the young Warren's poems began to appear in the group's journal, The Fugitive, 'that boy's a wonder - has more sheer genius than any of us; watch him: his work from now on will have what none of us can achieve - power'. Warren's work won wide-ranging critical acclaim including Pulitzer Prizes for fiction and poetry. In 1986 he became the USA's first Poet Laureate. He died in 1989. 'Makes a sound case for regarding Warren as the most accomplished and substantial among living American writers. The most comprehensive, informed and rewarding book on Warren to appear to date'.Richard Gray, Journal of American Studies, December 1980 'You have written with great and graceful clarity and persuasiveness and you have delineated what I hope is my history. I don't know how to thank you. But I can thank my luck for you.' Robert Penn Warren in a letter to the author 1, black & white illustrations