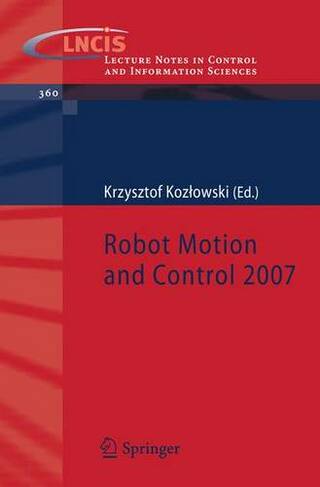 Robot Motion Control 2007 presents very recent results in robot motion and control. Forty-one short papers have been chosen from those presented at the sixth International Workshop on Robot Motion and Control held in Poland in June 2007. The authors of these papers have been carefully selected and represent leading institutions in this field. 13 Tables, black and white; 187 Illustrations, black and white; XX, 452 p. 187 illus.

Professor Kozlowski and members of the International Program Committee have been working in the area of robotics and automation for many years. They have experience of various fields of robotics and have been working on control theory with applications in robotics for some time now. Professor K. Kozlowski gained both his M.S. degree in electrical engineering and his Ph.D degree in control engineering from Poznan University of Technology, where he is currently a full professor of robotics and automation. He is the author of a book titled Modelling and Identification in Robotics (Springer-Verlag, 1998). He is on the editorial boards of several Polish and international journals (e.g. IEEE RAM, IEEE Trans. CST, Control Society Conference Editorial Board). He has served every year since 1995 on the ICRA Program Committee. He has worked as a program chair of the International Conference on Advanced Robotics (ICAR), 2001, Second International Workshop on Robot Motion and Control (RoMoCo), 2001, and vice chairman of the 7th IEEE Conference on Models in Automation and Robotics (MMAR), 2001.He has been a Senior Member of the IEEE since 1988. In 2001 he was elected as a Chairman of the IEEE Robotics and Automation Chapter in Poland. He is a member of the Control Systems Society Chapter in Poland. He has served as an RAS AdCom member from 2000 till now. He plans to enlarge IEEE student and regular member participation in Poland and former Eastern European countries along with the conference activities in these countries (i.e. MMAR, RoMoCo) under the umbrella of both organisations.