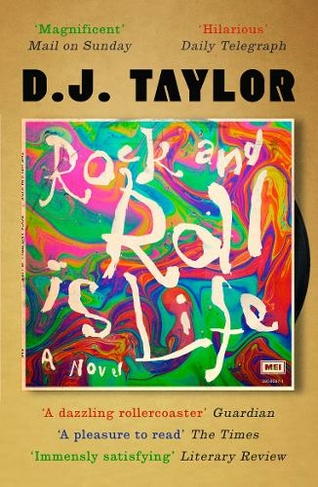 'Rock and Roll is Life': The True Story of the Helium Kids by One Who Was There: A Novel

By D.J. Taylor (Author)
Paperback
https://www.whsmith.co.uk/products/rock-and-roll-is-life-the-true-story-of-the-helium-kids-by-one-who-was/d-j-taylor/paperback/9781472128829-12-000.html £9.01 rrp £10.99 Save £1.98 (18%)
GBP
Availability
In Stock
Free Delivery Available When You Spend £25 Or More
Details
Spend £25 on eligible products to receive free standard delivery to home or free next working day click and collect to store
Share

'Taylor's magnificent new novel is Spinal Tap for literary types . . . thoroughly entertaining, knowledgeable romp through the fear and loathing of rock's golden age. Beautifully written and consistently funny, it is also a poignant account of one man's search for his own identity' Mail on Sunday 'A dazzling rollercoaster homage to an era both bacchanalian and oddly innocent' Guardian You may remember the Helium Kids. Back in their late '60s and early '70s heyday they appeared on Top of the Tops on 27 separate occasions, released five Billboard-certified platinum albums, played sold-out shows at Madison Square Garden and were nearly, but not quite, as big as the Beatles and the Stones. Three decades later, in the big house on the outskirts of Norwich, Nick Du Pont is looking back on the rollercoaster years he spent as their publicist in a world of licensed excess and lurking tragedy. What follows is not only the story of a rock band at a formative time in musical history, when America was opening up to English music and huge amounts of money and self-gratification were there for the taking. For the tale is also Nick's - the life and times of a war-baby born in a Norwich council house, the son of an absconding GI, whose career is a search for some of the advantages that his birth denied him. It is at once a worm's eye of British pop music's golden age and a bittersweet personal journey, with cameo appearances from everyone from Elvis and Her Majesty the Queen Mother to Andy Warhol. 'Rock and Roll is Life' is a vastly entertaining, picaresque and touching novel inspired by the excess and trajectories of the great '60s and '70s supergroups, and of the tales brought back from the front line by a very special breed of Englishmen who made it big in the States as the alchemists and enablers, as well as the old making way for the new in the era of the baby boomers. At its heart is one man's adventure, and the poignancy of the special relationships that dominate his life. N/A

D.J. Taylor's novels include English Settlement (1996), which won a Grinzane Cavour Prize, Trespass (1998) and Derby Day (2011), both long-listed for the Man Booker Prize, Kept: A Victorian Mystery (2006), a Publishers Weekly book of the year, and The Windsor Faction (2013), joint winner of the Sidewise Award for Alternate History. He has also written several works of non-fiction, including Orwell: The Life, winner of the 2003 Whitbread Prize for Biography and, most recently, The Prose Factory: Literary Life in England Since 1918 (2016). He lives in Norwich with his wife, the novelist Rachel Hore, and their three sons.