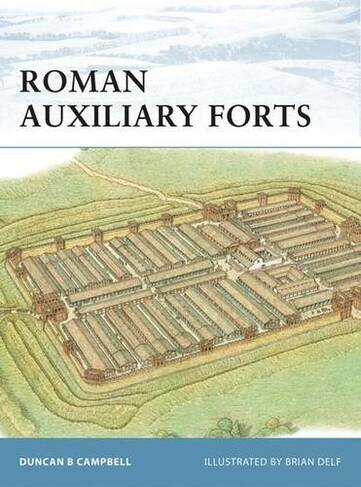 By Duncan B. Campbell (Author), Brian Delf (Illustrator)
Paperback
https://www.whsmith.co.uk/products/roman-auxiliary-forts-fortress-no-83/duncan-b-campbell/brian-delf/paperback/9781846033803-01-000.html £11.95 rrp £12.99 Save £1.04 (8%)
GBP
Availability
Currently unavailable. We don't know when or if this item will be back in stock
Free Saver Delivery on orders over £20
Details
FREE SHIPPING over £20 for Saver Delivery
Share

With the vast expansion of the Roman Empire came a need for more and more fortifications to defend it. The borders of the Empire stretched through wildly different terrains which demanded a huge variety of different fortifications, depending on the local conditions and the threats faced by the different areas. The adoption of local troops (auxiliaries) and local building techniques at key strategic points on the outskirts of the empire led to an intriguing mix of strong Roman structure with unique culturally diverse elements. Describing the development of these hugely varied defensive systems, Duncan Campbell delves into the operation and social history behind the fortifications.With detailed colour artwork and maps, he traces their history through the Batavian Revolt of the 1st century AD, which saw auxiliary units scattered far from their native regions, until the decline of the late 3rd and 4th centuries placed their fortifications in an increasingly pressurized and eventually untenable position. Illustrations (chiefly col.)

Dr Duncan B Campbell is a specialist in ancient Greek and Roman warfare. He published his first paper in 1984, as an undergraduate at Glasgow University, and produced a complete re-assessment of Roman siegecraft for his Ph.D. His work has appeared in several international journals. He lives near the Antonine Wall in Scotland with his wife and son.