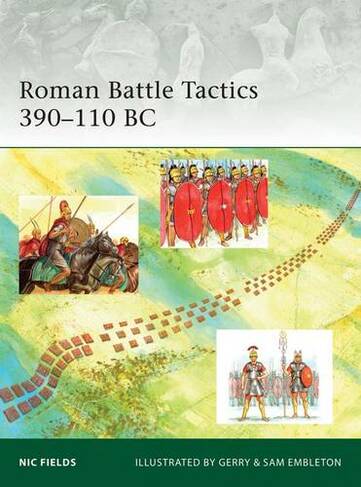 By 390 BC, the Roman army was in need of change, as Greek-style tactics of fighting with a heavy infantry phalanx were proving increasingly outdated. A military revolution was born in the form of the legion, a tool of war better suited to aggressive action. Yet by the end of the 3rd century BC, Rome's prestige was shattered by the genius of Hannibal of Carthage, causing the Romans to revise their battle tactics once more, this time by inventing a whole new kind of soldier. This book reveals these two defining moments in Roman military history and the revolution in battle tactics that they caused, examining how the Roman army eventually became all-conquering and all-powerful. Illustrations (some col.)

Ross Cowan was formerly a research student at the University of Glasgow where he was recently awarded a PhD for a thesis on the Roman army entitled 'Aspects of the Severan Field Army AD 193-238.' The major themes of the thesis are the organisation of the Praetorian Guard and Legio II Parthica, their recruitment, numbers and equipment. Ross also completed his first degree at Glasgow. In 1999 he was elected a fellow of the Society of the Antiquaries of Scotland. He has previously written Elite 155 Roman Battle Tactics 109 BC-AD 313. The author lives in Glasgow, Scotland.