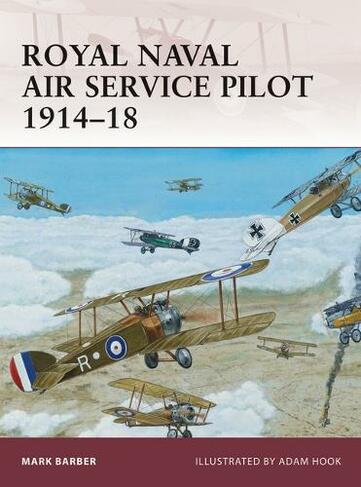 In 1914, the Naval Wing of the Royal Flying Corps was subsumed into the Royal Naval Air Service (RNAS). With the bulk of the Royal Flying Corps engaged in France, the aircraft and seaplane pilots of the RNAS protected Britain from the deadly and terrifying Zeppelin menace. In 1915, the RNAS sent aircraft to support the operations in the Dardanelles, and also gave increasing support to the Royal Flying Corps units engaged on the Western Front, conducting reconnaissance, intelligence gathering and artillery spotting, bombing raids, and aerial combat with German pilots. This book explores all of these fascinating areas, and charts the pioneering role of the RNAS in military aviation. Illustrations (some col.)

Lieutenant Mark Barber RN is a pilot based at RNAS Culdrose. His dissertation on the Fleet Air Arm in the Mediterranean in World War II was named as the best in year at the Royal Navy Academy, Dartmouth. He was named Best Aircrew Officer upon graduation of his class. His unlimited access to Royal Navy and Fleet Air Arm museum records and photos, has resulted in a book that is a worthy addition to the annals of British naval aviation.